Beyond the Mushroom Ring – A Day with the Fae

Beyond the Mushroom Ring – A Day with the Fae 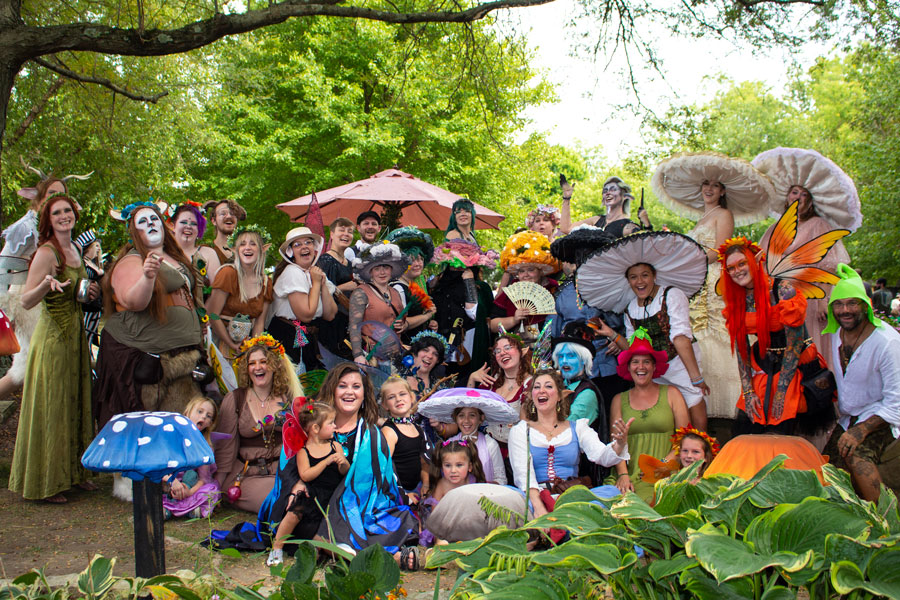 Considering the concept of fairies from a historical standpoint might be enough to give one pause. They are only folklore after all, aren’t they? Stories meant to explain the weirdness of the world or to prevent children from misbehaving. That is an easy stance to take in 2022. But to the people of 16th century England and through much of the world, these entities were very real indeed.

Much of the folklore surrounding fairies have been cleaned up over the passing centuries. Their more honest portrayal was more akin to one of the reasons you don’t whistle at night. The wee folk could be capricious in their entertainments, just as likely to harm a mortal as to help them. They were alluring and pernicious, beautiful and unpredictable. And with such a reputation it was considered better not to draw their attention and risk becoming the focus of their games.

The lore surrounding the fair folk is as varied as their appearance, usually depending upon the region and cultural background of whoever is telling the story. For instance, the name Puck, made famous by A Midsummer Night’s Dream by William Shakespeare is most likely a derivative of the Welsh ‘puca’, a shape-changing fairy said to bring fortunes both good and bad. Banshee are an anglicized version of the Gaelic ‘Bean Sídhe’, her terrible wailing was a grim herald of the death of a family member. The Slavic people referred to the ‘Vila’, a nymph-like creature prone to hunting in the wild and confusing men they find interesting.

Stories of the wee folk go far beyond the bounds of European folklore, with similar traits of mischief and mirth being found in supernatural entities throughout the world. But for the sake of the blog, we are going to focus on the general idea of fairies from the 1500’s rural Elizabethan perspective.

As a peasant, there is something you know with the same assurance that you know the seasons will change and taxes will rise. Fairies exist. They live beyond the hedge, in a world that lies right alongside our own and can interlace itself with human lives. They are full of mischief and are not the sort of thing a good Christian ought to be found associating with. Some say they are in league with Satan and make merry alongside his devils. Others believe they are the souls of pagans who were not so bad as to go to Hell but certainly not worthy of Heaven as they were unbaptized. To the Irish, they are a people, a culture in and of itself that once inhabited the land only to vanish when the first settlers came. But you might not have ever met an Irish person. So to you the fairies are a force to be reckoned with.

In the stories you’re told by your mother, fairies appear in liminal spaces. Dusk and dawn, full moons and fog-covered fields. They may have dwellings in the wild and dangerous places of the world, keeping to the deep woods or brackish marshlands. They help witches with their spells and lure folks away from the roads with their unearthly music and hypnotic dances. They can curdle milk, make cows sick, and steal unwatched children to replace them with their own calamitous offspring. They can also give gifts. If the fair folk take a liking to you or saw you paying them proper respect they could be generous beings and show their favoritism by guarding over your livestock or helping to keep your household clean. They can cure illness and even lead you to treasures that will benefit your family. But this often has a bad ending in the stories as humans are prone to greed and foolishness.

And yet their glamour is undeniable. Queen Elizabeth, Gloriana herself, is often mythologized in literature and on stage as The Fairies Court, tying her reign into the ‘Golden Age’ of English folklore along with the likes of King Arthur. It was a shrewd political move, but the concept went far beyond storytelling. Fairies are notorious for being creatures who prize their autonomy and freedom to do as they please. For a queen who was staunchly determined never to marry and to rule as the sole monarch of England, it may seem an apt comparison to see Her Majesty wreathed in red hair and gleaming jewelry as something of a fairy queen herself. She is in fact immortalized as such in Edmund Spenser’s The Faerie Queen (1575), which was commissioned by Robert Dudley and shows a multi-faceted understanding of Elizabeth’s personality.

With such a perspective in mind, ask yourself this: Were you to be found walking down the lonely road of the English countryside as dusk fell dark, and were you to see from the corner of your eyes a gleaming glow of red and yellow beyond the bounds of the tree line, were you to hear music unlike any ever heard before in your village, and were you to see shadows dancing and laughing together, calling your name and inviting you to make merry with them beneath a midsummer moon…

Would you put your foot from gravel to grass and follow their sweet song?

The Fairies of ORF

Creating Ember came out of a burning desire to do something fun and fresh for myself. The idea of being in fae was so enchanting and wonderful. I recently left a festival job at a haunt where I had to be this big, mean, and demonic character and it was very exhausting mentally. And the idea that I could be this mythical creature that I got to create and be whoever I wanted them to be was so thrilling.

There is a fine balance to strike when portraying the hidden folk in the modern era. Some even feel that fairies don’t belong at a renaissance festival in the first place if it is the intention of the faire to be historically accurate. With that in mind, we have to remember that the Elizabethan people did very much believe in fairies, witches, devils, and all sorts of supernatural creatures. So where else would you put them? In the modern era, fairies represent a rebirth of wonder and joy, a reminder that there is magic in the world if we only dare to reach out and seek it. Fantasy Weekend gives the members of the Fairy Guild of the Ohio Renaissance Festival the opportunity to come forward and share that magic with children and adults alike.

During the weeks of rehearsal that precede the festival’s opening, members of the Guild take time to discuss their persona. New members are brought in from those who made the audition and the veterans of cast help guide them through their development. It’s a bit of a process, as some newbies come in with a fairly clear idea of what they want to be while others may need a bit of help narrowing things down.

I initially auditioned for fae guild because I thought that, if I was going to get away from reality and work at the Ohio ren fair, I wanted to get deep into it as I could, and as far away from reality as possible. I later learned that it’s rare for first years to actually get into fae I found out I got into fae, and immediately had to shift my focus. –

Each fairy persona is unique in its own right, yet the majority are reflections of the natural world and its properties. For instance, Terra, a.k.a Mother Nature, is the first fae, left in charge of caring for every living thing on the planet besides humans. Whistle is the resident weather fairy, who apologizes profusely for the opening weekend this year but insists that it was the fault of the cloud because they do not like to listen. There is Caliope, Perch, Eden, Valerian, Knot, Sprout, Nissa, Ember, Astrid, Pockets, and Historia, all of whom make this colorful throng of sprightly beings come to life every day of the festival.

The Faebles of Willy Nilly have a love for sewing nature into their clothing. Leaves are very comfortable, and clouds add extra softness and warmth. Bark and spider silk come in handy from time to time. Not all of us grow our own feathers, or are literally on fire. So we make due and adorn what is around us. 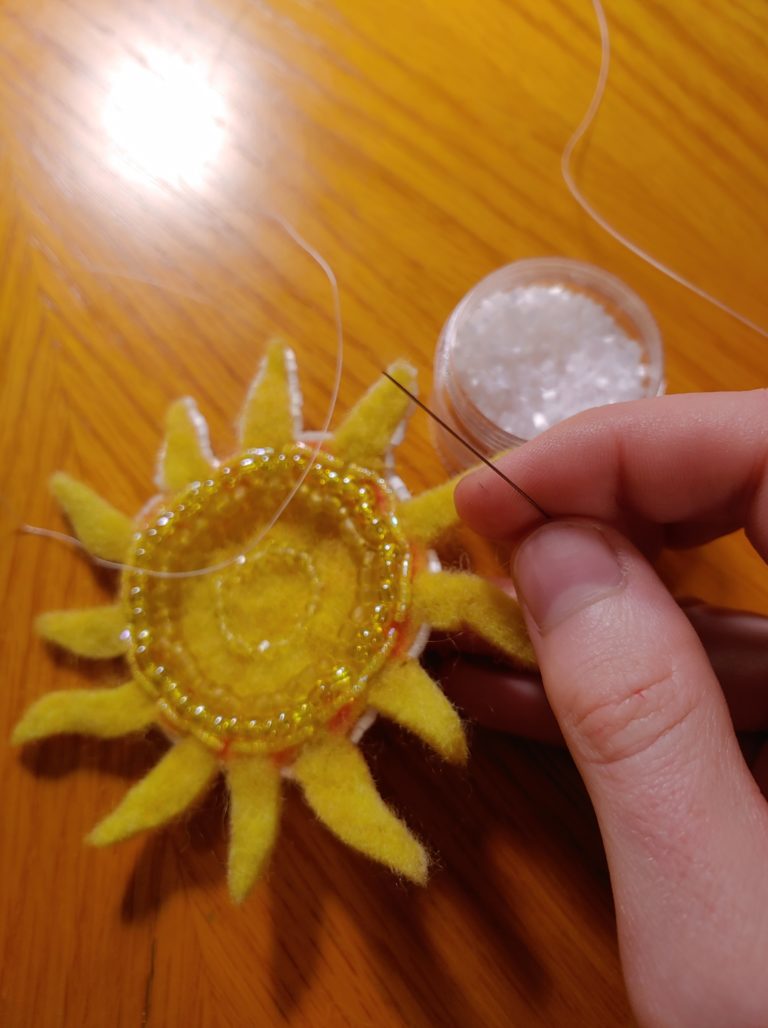 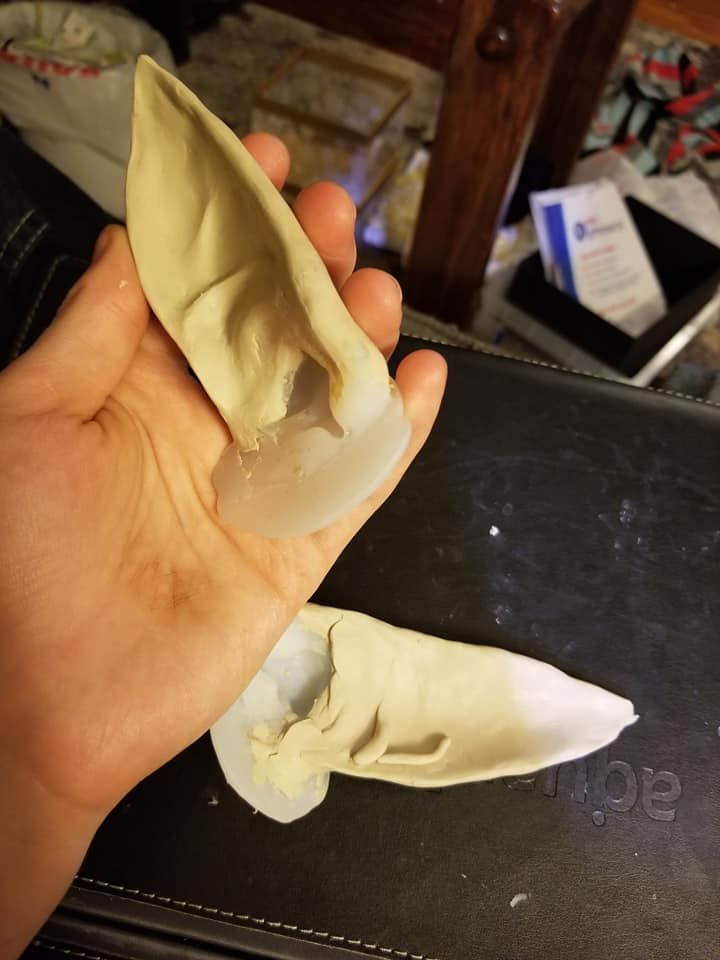 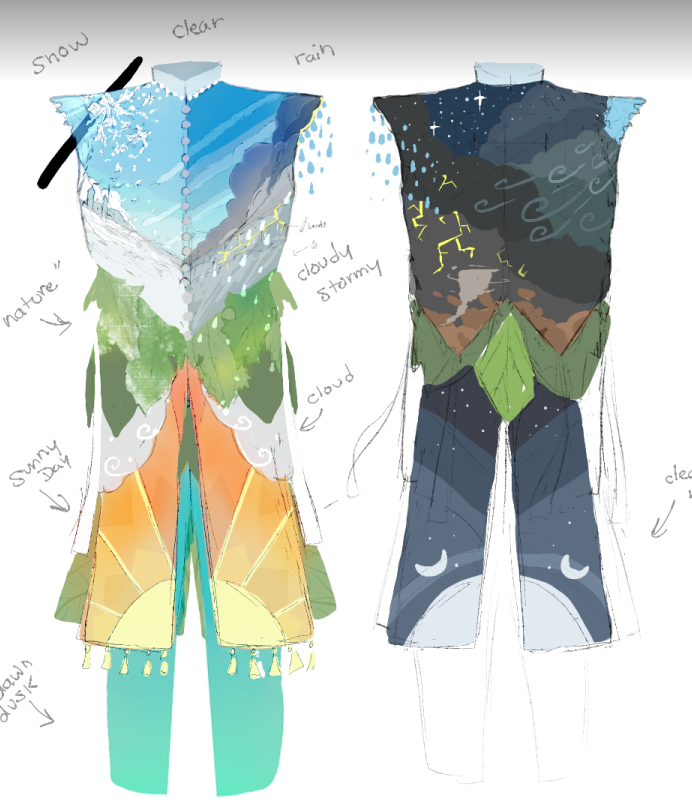 Prep work is essential. Once they gain an idea of who their character is it becomes time to flesh them out visually, creating a definitive look that will come to be known across the grounds. One of the most outstanding features of the fae guild is their makeup skills, the application of which begins hours before the faire even opens. The garb takes on extra importance, as the fairies of Willy Nilly are known to mimic human fashion trends without completely understanding them. This is where the fantasy and history truly blend, allowing the characters to ‘fit in’ with the rest of the cast and yet stand out as something wondrous. From face paint to glitter, spirit glue to wings, each detail is important to the overall configuration, helping to make the fae more memorable.

The makeup often feels like a Herculean effort requiring me to get up at 6AM every festival weekend, and though I often am weary of body once that paint is on and I don my wings, my spirit lifts and I am energized. Being a rennie is already a labor of love, being a fairy is even more so. But it pays well in love, laughter, and wonder.

While the court has a tendency to stick close to the Queen, the fairies are more spread out. Some are involved in the Choir and Dance Guilds, while others help with shows such as the Royal Feast or Witch’s Spirit Tasting. Seems the idea of fairies and witches working together remains true! So if you’d like to catch sight of our frolic of fairies, the best time is during Fantasy Weekend when Fairy Playtime takes place.

It’s easy to see why so many flock to their presence. Everyone gathers next to the pond behind the front gate and joins in for an hour of fun and games. Queen Titania herself is known for dropping by, adding to the glamour of the moment. Once some of the energy has had a chance to be run out, some time is set aside for the kids to get up close and introduce themselves, grab a few photos, and exchange trinkets with their favorite fae. You can see the joy in their eyes, the hesitation mixed with excitement as they approach to speak with these strange and bright creatures.

I spent several months and the off season, reading traditional Scandinavian fairy tales as well as some popular culture. It was when I was researching the old Danish traditions that Nissa started to come together. She’s an English gnome with Danish roots which I show by dressing her in the English bodice but with clasps I bought from Norway, wood clogs I bought from the Netherlands!

I’ve often wondered if children, especially the younger ones, know the difference. If they understand that this is a game in the same way that they know they’re not meeting the real Queen Elizabeth I. But every Fantasy Weekend I am reminded that for this brief moment in life, when they pass a shiny stone across the green palm of a fairy, they believe.

The Origins of Fairies

Queen Elizabeth and the Fairy Court