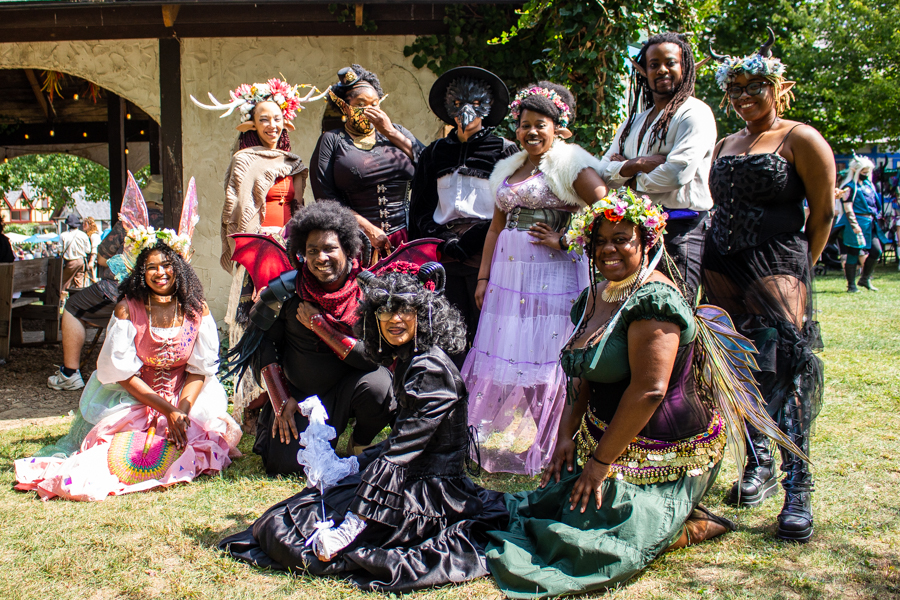 Our faire is happy to be the place where ‘fantasy & history collide’, providing a glimpse into the age of Queen Elizabeth I along with a merry jaunt into the realm of the whimsical. While some decry this choice as being historically inaccurate, the honest truth is that the folk belong here at faire, maybe more so than anywhere else. After all, European folklore is riddled with tales great and small of encounters with the good folk and their presence was an accepted part of life for generations.

Belief in the fae ran strong during the 16th century and all throughout Europe when much of the world was still rural. Like all supernatural things, fairies were pernicious creatures, as likely to be benevolent as malicious, and you had to be cautious in dealing with them. We’re lucky that the folk who visit Willy Nilly are so friendly in nature and willing to romp about the grounds causing only slight mischief, much to the amusement of our villagers and guests.

The best part of my day is being approached by an adult for a photo with their child, and then the look of (not so secret) longing turned to surprised glee on the face of the parent(s) when I ask if they want to have one with me too. Every one of us Faebles does what we do to bring magic to life for the children, but I also particularly enjoy reminding the grown-ups that you are never too old to believe in magic and play.”

Our modern concept of fairies draws much from the works of William Shakespeare, who utilized the folk in works such as A Midsummer Night’s Dream, in which the unwitting humans are drawn into a lovers spat between the royal court of King Oberon & Queen Titania. However, the literature did not begin or end with him. Folklore concerning the wee good folk goes back for ages into the mythology of the pre-Roman tribes that inhabited Europe. Oberon himself is mentioned at least as far back as the 13th century in the poem Huon de Bordeaux where he is said to be the child of Morgan la Fey and Julius Caesar! Writers such as Robert Herrick wrote Oberon’s Feast (1648), which told of the lavish ways in which the fae courts imitate human decadence.

Increased dependence upon urbanization and sprawling cities in the 1800’s lead to a waning concern with the fairies and the old stories. People began to see it as something in which only uneducated peasants believed. However, this did not stop the tales and stories from being passed down from generation to generation, eventually coming with many of our ancestors as they immigrated from overseas to America. If you trace back what we would consider local legends and tall tales you will find that they share many of the same themes and trappings that have blended in with the mix of culture and heritage over time.

Compare the stories of John Henry (African American) and Cu Chulainn (Celtic) both noted for their unbroken strength and determination before a challenge. Both of whom fall in their moment of triumph over a worthy foe. Or perhaps the Headless Horseman (American Revolution), a terrifying visage that plagues rural Mount Pleasant in Washington Irving’s famous story Sleepy Hollow, and his similarity to the Dullahan (Irish) who morbidly predicts death in his wake? The phenomena of the ‘White Lady’ who heralds or causes doom is so ubiquitous in folklore that there is an iteration of her in nearly every culture across the globe from La Llorona (Hispanic) to Perchta (German), the ben síde (Irish) to the onryō (Japanese).

In remembering fairytales we keep alive an oral tradition that is woven into the fabric of our subconscious. So lets take a closer look at the fae culture of ORF.

We think of the little folk as a romantic relic of the past, yet there are still people in Ireland, Scotland, and Wales who claim not to believe in fairies, yet won’t cross a mushroom ring if you paid them to. The supernatural shares a place in the human consciousness that cannot be denied, so it should come as no surprise for a place like the Ohio Renaissance Festival to embrace the magic of these stories and invite it willingly into the village with its very own group of Faebles!

The Faebles bring with them that special sense of wonder which is rarely found and badly needed in this age, indulging in a sense of play that is familiar to all of us. From chasing bubbles across the field to teaching children how to play Red Lantern/Green Lantern, I am thrilled to see how quickly even the shyest child warms up to them. We talk all the time about how ‘kids these days’ are glued to their devices, but nobody turns down sweet Sprout when they offer a spot at Duck, Duck, Goose. 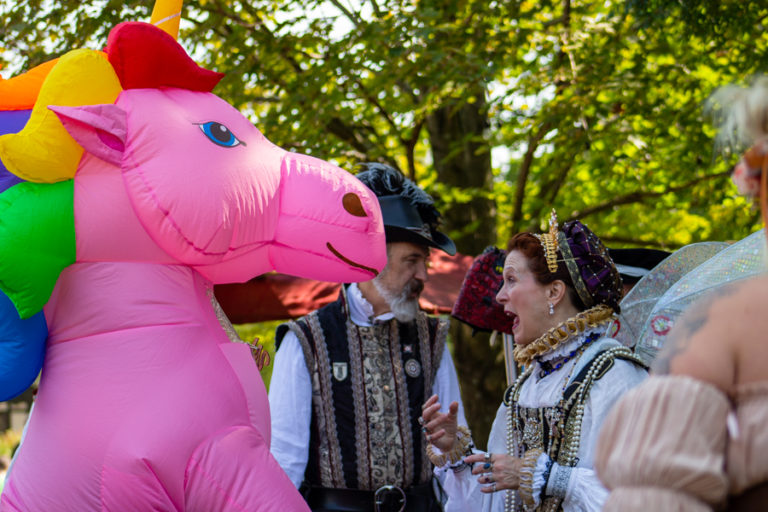 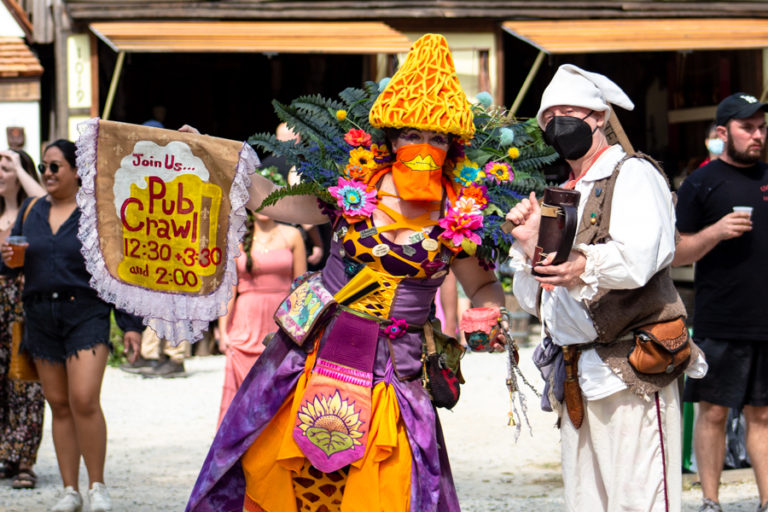 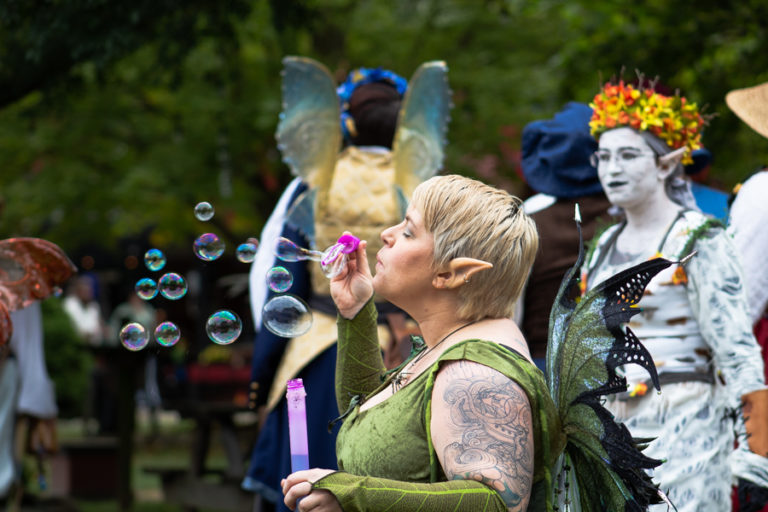 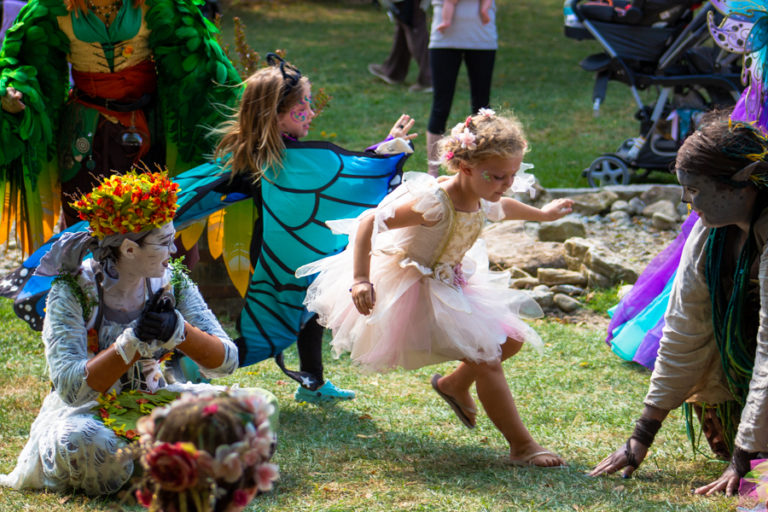 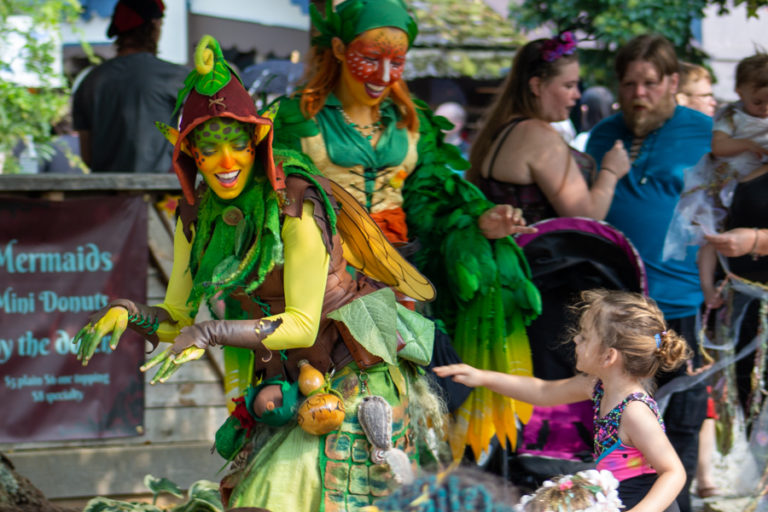 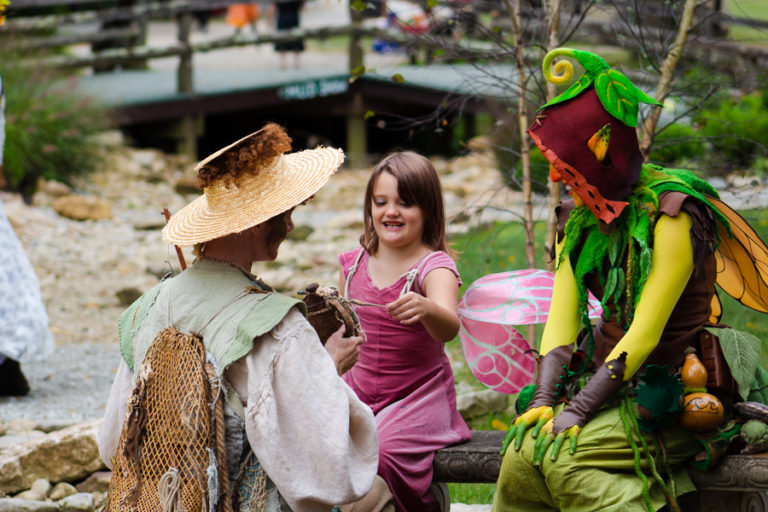 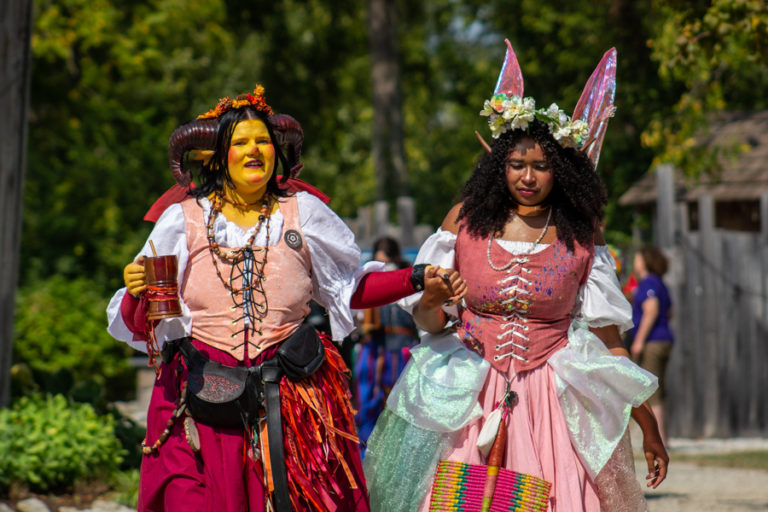 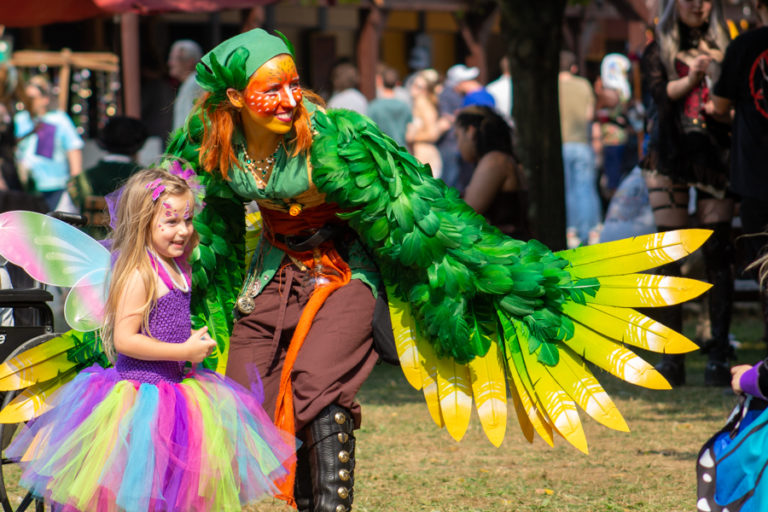 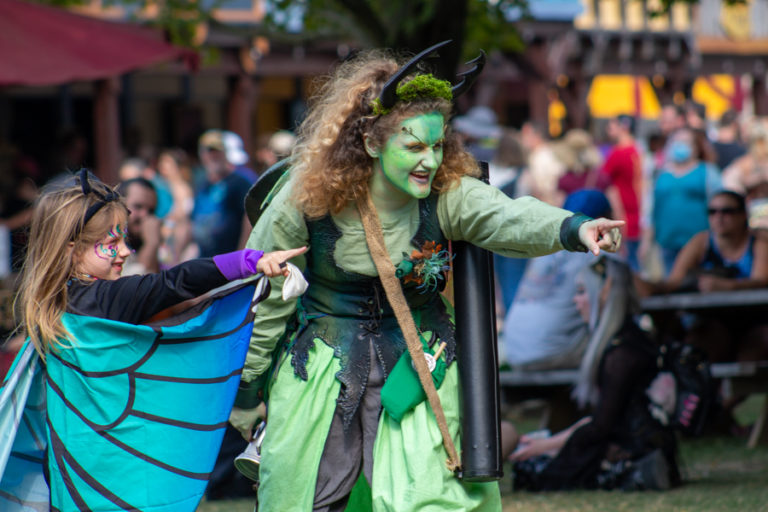 Last Saturday, ORF was treated to a very special appearance by none other than the local Black Fae Day group! For those of you addicted to TikTok (like me) you may have seen this hashtag pop up over the course of the last year, encouraging POC content creators to show off their magical side. With a mission to promote a positive representation of POCs in fantasy, they took over social media on May 8th with a burst of creativity that included costume designers, artists, photographers, and cosplayers.

We met up with Jasmine (a.k.a Guild Mistress Halcyon), the creator of #blackfaeday who was kind enough to take a break during the day and talk to us about some of the goals and plans for the future of the movement.

Talk to me about how the movement got started, how did #blackfaeday get its beginnings?

It started shortly after Black History Month and 28 Days of Black Cosplay which has been going on for a number of years. It’s so beautiful and creative, I didn’t want that feeling to end. I thought, there isn’t something like this for high fantasy or fairytales. So I created the hashtag and posted it in March. It kind of took off undercover till May 8th when it blew up on TikTok, Twitter, Instagram, Facebook. We were flooded with positive images of black fairies.

You said that there are royal houses. How did that develop?

That came about very organically among our group. Someone just suggested ‘What if we have fairy houses?’ and I was like ‘Let’s do it!’ We started out with around 25 different, unique houses, each one was created independently by members and followers of the hashtag. Now there are so many popping up. One of my favorites is House Knuck If You Buckingham, and it’s about being royal and ratchet and it’s just a beautiful thing to see happen.

If somebody wants to become a part of the Black Fae Day movement, what do they need to do? How do they get involved?

I thought it was really important to be as transparent and easily accessible as possible. So all you have to do is join the hashtag #blackfaeday. Make a post with you in fairy ears or something you’re crafting with the hashtag and we’ll find you! I’m always on Insta or Fb sharing what’s going on in the community. We have a public group called Black Fae everyday. You’re welcome to share there and uplift black voices. We have a private group called Black Fae Community as a safe space who want a smaller, more intimate sharing.

After May 8th people really wanted to do this more often. It’s really just happening as we piece it together as a community! This is our first meet-up at ORF and I’m so happy to be welcomed. It’s been a very happy experience for me. Because people are expressing a desire to come together more often I’m working on a calendar so we can start scheduling things. On Sep 25th we’re planning an event called #sakofasolstice where you use the hashtag and share your creativity through different mediums.

Talk to me about Guild Mistress Halcyon. What goes into the creation of your faesona?

Halcyon is very much a peaceful, quiet-natured person like myself in real life. I came through the process where I imagined; If I could be any kind of being, what would I be I wanted a creature of light and peace, I took some inspiration from dryads with the feeling of flowers and being from the earth.

What kind of resources are you all compiling to help your creators get their faesona together?

One area where we put together a lot of that is through our Facebook group. We have a thread where we keep track of resources so our creators can feature their talents like armor making, wings, whatever they need so that we can stay in contact with our makers.

What do you find to be the most rewarding about doing this?

It’s all about the unity for me. Just finding the community and showing people that this is something they can have and something they can live. I get messages every day saying ‘I’m so glad I found you!’ I found my own Fairie Auntie, she’s become the fairy godmother to the whole group. She told her story of growing up in California in the 80s and being into punk and fantasy but not having a community to really go to. Her involvement has made this an inter-generational experience. The reception had been very positive and the solidarity is so wonderful to experience.

Where do you want the #blackfaeday to go from here? What are your plans for the future?

Our hope is to facilitate more meet-ups and build a relationship with places like the Ohio Renaissance Festival. We’d like it to become more of a formal guild so we can bring people together so that people know where we’re going and we can increase our representation in fantasy. I’ll do anything I can to make it grow from here.

Is there anything else essential that you want people to know? 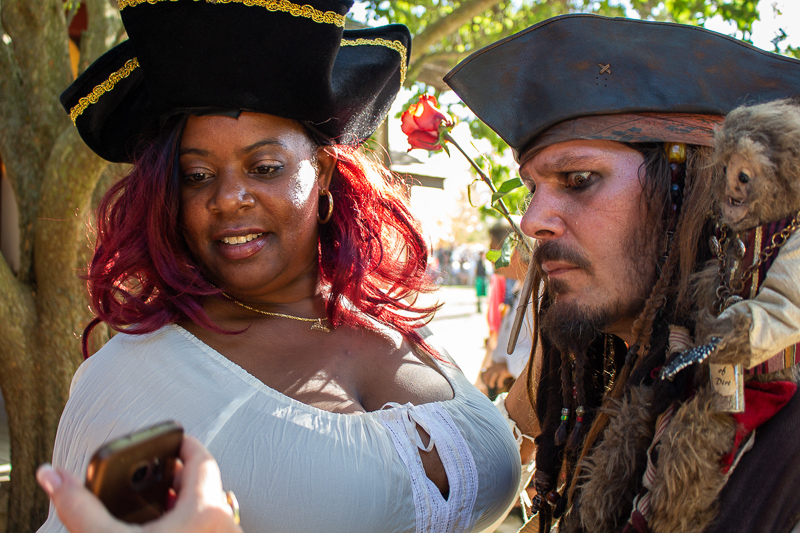 Board The Ship To Adventure! Pirates Weekend is Next!

Correction: In a previous version of this article the character name “Halcyon” was mispelled.