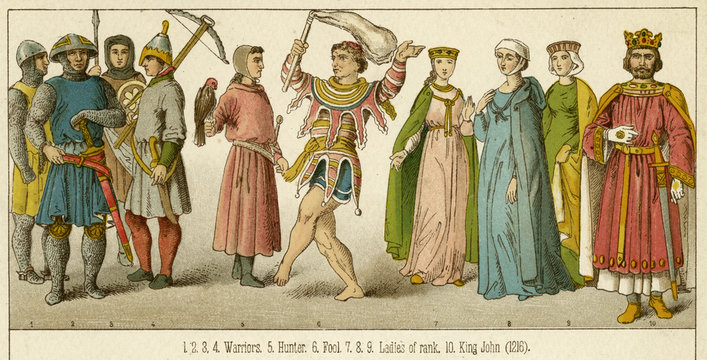 “This fellow is wise enough to play the fool.”

The visual effect of a jester is something that most people are familiar with, even if they don’t really know why. Diamond patterned clothing in bright colors, a three-pronged hat with bells jingling about. They may wear masks or have elaborate face paint that reflects their character’s personality and carry around a small staff with a miniature jester face on top. As we get closer to Halloween the creepy jester makes an appearance, typically in black and white with a twisted and far more frightful smile displayed across their mask.

We think of these colorful characters as being a part of medieval and Renaissance life. However, when it comes to the familiar fool, the history of their particular brand of theater goes further back than we thought. Our concept of the jester is relative to the European imagery popularized by media throughout the modern age. But it would seem that this figure is universal, having enjoyed popularity throughout the world during different periods of history. From China to the Middle East, India, Africa, and even the Americas, the pantomime of the untouchable fool continues even into the modern era, offering up their wit to entertain crowds and crowns alike.

In ancient Rome, the term balatrones was used for a jester or a buffoon who was paid for their performance at wealthy parties. This term is believed to derive from the term blateae, which is to say dirty or covered in mud. Balatrones were itinerant folk, moving from place to place in order to find work entertaining at festivals. However, not all of Rome was amused by these wandering minstrels. Actors held a dangerously low status in Roman society, relatively on the same level as prostitutes. Roman citizens were not allowed to become actors and socializing with them was considered to be damaging to one’s reputation. Yet this allowed them a kind of underground privilege. They could get away with being highly critical of the status quo, mocking the politically powerful and wealthy, and depicting lewd acts on stage.

As the jester began to spread throughout Europe, they began to be a more formalized guild in their own right. Their clothing, which is often depicted as a source of amusement, also makes their status quite clear and offers a certain degree of protection. The cap and bells were meant to mimic the tail end of an ass, while the bells announced their presence. Their marotte, or scepter, is intended to mimic a king or queen’s scepter, denoting their ironic level of authority. Nobody wants to become the subject of a jester’s derision.

Throughout Europe, many royal courts had licensed entertainers to keep the mood jolly and the revelry going. This went beyond the jesters with the inclusion of jugglers, musicians, acrobats, and storytellers. This was also one of the few professions in which men and women could both take part. King Henry VIII had a favorite fool named Will Sommers while his daughter, Mary I, kept a jester called Jane Foole. During the reign of Queen Elizabeth I, William Shakespeare often featured clowns and jesters in his plays, and even employed a professional jester named Robert Armin.

Their purpose often went beyond the obvious. Jesters could be used as assassins to ones reputation, using their art form to mock ones political or social opponent publicly. They could be sent to the battlefield to taunt the enemy forces and provoke them into making rash decisions. Fools could get up on stage and perform descriptive plays that caused general enmity and disdain for the countries enemies and generally help rumors spread, if they were sufficiently paid to do so.

However not all was jolly in the jesters profession. Two categories of fool were generally recognized; the natural and the artificial. While the artificial fool was one who had been brought up and trained to perform in their career, natural ‘fools’ were those who were frequently born with physical or mental disabilities that made them unsuitable for work in general society at the time. They did not have the benefits that a trained jester might enjoy, and were treated abominably as subjects of fear and revulsion. There were exceptions to this, such as Jeffery Hudson, also known as the Royal Dwarf, who led an exceptionally interesting life full of royal courts, duels, capture by pirates, and return to England. But on the whole the natural ‘fools’ were not so lucky.

The prominence of the court jester would continue until the reign of Charles I (1625 – 1649). After the execution of the king and Cromwell’s Commonwealth came the Restoration in 1660 with Charles II. The new king did not continue the practice of keeping a jester, although he was a supporter of entertainment and music halls. He favored the work of Thomas Killigrew, who was known for his coarse plays and eclectic wit. Yet by the 18th century the practice of court jesters had all but died out, though some glimmer of it’s style remained in puppet shows like Punch & Judy.