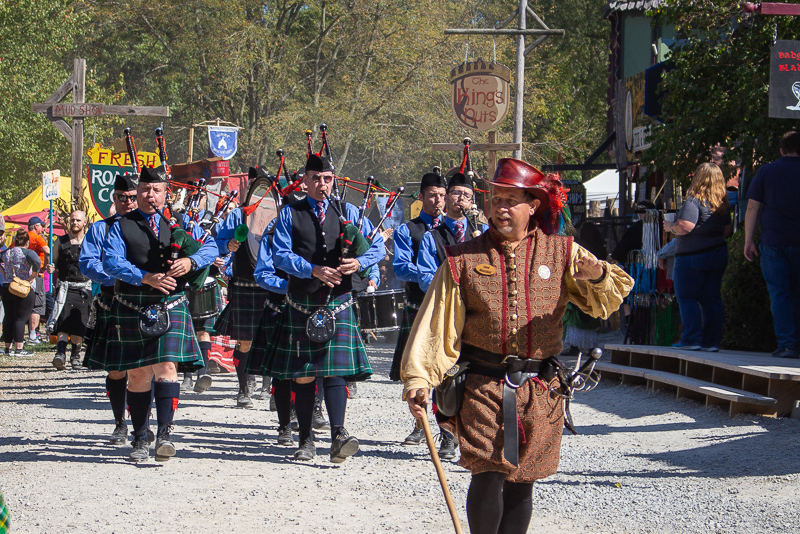 How better to start off the fall season than with Highland Weekend at the Ohio Renaissance Festival? You can start your day off with bagpipes, grab a batch of loaded tater tots over at the Aleing Knight Pub, and compete in the Kilt Contest where you can show off your legs to a cheering crowd! People came out in droves to proudly show off their heritage in beautiful tartan and the high hum of bagpipes.

I think everyone was happy to finally get a break from the heat. Saturday and Sunday hovered in the mid-seventies and when you add a little rain and the soft gray of cloud overhead it was downright perfect weather to get dressed up and go wandering. I quickly found myself up on the hill behind the church, revisiting with Clan Stewart – who we had last meet during Celtic Fest Ohio – as we discussed the myriad of cultural background attached to the Celts. I’ve always been told I’m part Irish. Well lo and behold, we found my family name in a book of Scottish surnames with the earliest recorded use being back in 1097, roughly around the same time as the First Crusade. That’s a pretty neat thing to find out about yourself, and one of the many reasons I love Highland weekend! You never know what you’ll discover about yourself!

If you missed them during Celtic Fest, this was a great weekend to meet up with the Irish Wolfhounds of Cu & Craic These big pups always bring attention to themselves by being just about the sweetest dogs in the world. The breed may go back as far as the 6th century when it was dubbed the Cú Faol (Gaelic for hound – wolf). They’re known for their gentle temperament and quirky personalities, as well as being very loyal to their owners. Research more about them for yourselves! Their history is fascinating!

The Highland Games kicked off at 1:30 at the Arena of Champions (Jousting Lists), kicking things off by tossing a flaming caber to the roar of the crowds! Every year some amazing people volunteer to take the field and show off their skills at traditional sports from Scotland’s past. I loved watching the caber toss on the men’s side while the women rocked at the stone throw. My personal favorite is the Sheaf toss, wherein a bundle of straw is tossed over a horizontal pole with a pitchfork. Sounds easy right? Well, it is until you factor in doing it backward and hitting the right trajectory! It’s quite impressive to watch these feats of strength, and every year gets more competitive!

After the games I booked it over to Jameson’s Whiskey Tasting with the Witches of Willy-Nilly. Now I won’t lie, I’m not much of a whiskey drinker myself. So I took advantage of the whiskey enthusiasts present to tell me what they liked about the selections offered. The Black Barrel was by far the favorite of the day. I loved the rich vanilla scent along with the sweet caramel notes that drifted through the air. I might even be convinced to get some for myself to fully appreciate the autumn season!

Over at the Aleing Knight Pub I got an eyeful of tartan on display as the Wenches’a’Wailing hosted the Kilt Contest to celebrate Highland Weekend! Several bold competitors used the stage like a catwalk, giving us a ‘cheeky’ spin to get the crowd riled up. But in the end, nobody could compete with the wee lad in the red kilt who stole the show. He took first prize, making himself the youngest contest winner ever and creating a new under 21 category! An adult winner was selected as well but I think we all know who we’ll remember.

The Tartan Terrors have long been a staple of the Ohio Renaissance Festival and this year was no exception! Their music is lively, upbeat, and has a wicked sense of humor that really draws a crowd. It’s not at all unusual to find people dancing in the aisles during their concert, pulling you into the rhythms and getting your feet moving. Earlier this year they lost one of their most enthusiastic performers, Ellen Wilkes Irmisch. Her talent as a musician and dancer always brought light to the stage and she will be dearly missed. Her family is holding a GoFundMe to help with the necessary expenses.

We had two very special guests out at ORF this weekend and I managed to catch their respective performances. Robert the Barrrd formerly from the Band of Pirates, is a fabulous musician. He really pulled in the pub crowd with his upbeat and foot-stomping tunes. He is very passionate about his art, and I enjoyed getting to see his preform. We got a chance to talk before the day got started so I asked him a little bit about his career.

The first Ren Faire I attended was ORF. I was a working musician (indie rock band) at the time. I also had a background in classical music, performance magic, clowning, juggling, stage combat, and musical theater. I loved the way that all of these elements of performance were used at the Renaissance Faire. It never occurred to me that I might also find a home performing there. Skip forward a couple of decades and I found myself helping found a pirate band. I first performed at the Kentucky Faire in the summer of 2016, and at Ohio in 2017, and I’ve been back every year since. It was a real pleasure to prepare my new act for Highland Weekend this year, and I really appreciated the welcome and response I got. As a solo performer, it is my hope and plan to come back for the full season for 2020.”

The other guest act I got to see was the Harmless Danger Juggling Show I caught his last performance on Sunday and let me tell you this guy was dripping with stage presence! The crowd was rolling with laughter and he did a great job of getting them engaged. I have a weakness for the sarcastic performer, especially one who’s clearly very talented and has put a lot of time and effort into their performance.

I hope they’ll both be dropping by against next year, maybe even for the whole run!

Oh but we weren’t done for the day, not by a long shot. What better way to start off spooky season than with a visit to Brimstone Haunt? Located literally right across the parking lot, Brimstone Haunt is a part of the Renaissance Parks and opens just an hour after ORF closes! So why not just come on over and spend your evening hours with all the screams and scares they have to offer?

I’m am a massive Halloween fan. So much so that I start celebrating in September and don’t stop ’till Nov 1st. Haunts are one of my favorite parts of the season, which means I was really excited to see Brimstone open up! Marc Maeder was kind enough to give me to grand tour and help me get some ‘face-time’ with one of their scare actors, Skinher. I asked him a bit about what it’s like to work at a haunted attraction and why he chooses to do this.

[For me] it’s about giving people that experience that rush of fear. It’s something we don’t get to experience in the day to day. It’s about putting all your stress and worries aside. It’s a different world and you can become what you want.”

I wasn’t too surprised by this. After all, isn’t that the reason we go to ORF? A chance to put the real world to the side for a little while and play pretend? We talked a bit about how he formed his character, and I cracked up as he told me Freddy Kreuger was a big influence. Skinher reflects on his character, “Sort of a charmer. Skinher is a real talker. He likes to stalk his prey.”

That kind of introduction gave me high hopes for the different attractions and I was not disappointed! We first hit the Haunted Hayride, which is a spectacular 20-minute long ride through the cornfields! But this was no leisurely autumn evening. Oh no! They brought a huge cast of scarers together for pyrotechnics, car chases, and scare zones that just blew me away! By the time we got off the tractor my heart was pounding and I was energized for the next attraction.

Zombie Assault is a VR ride that takes place in a hydraulic bus just next to the ticket booth. I’m not usually much for VR because it often feels like you’re just watching a movie. But this won me over! The graphics were excellent, the momentum of the ride was quickfire which kept you eager for the next scene. And while I won’t spoil the ending, I can promise you it was well worth getting on the bus for! I actually shrieked during the final moments!

Psychosis was next, and let me tell you this is the worst moment to discover you don’t like confined spaces! At least in an open environment you feel like you can run! But oh no! Not here! I got to travel through the madhouse all by myself, trying to escape the bloodthirsty inhabitants before they got me! With pounding music and people jumping out at you from every corner it felt like going to the world’s most disturbing rave and I was living for it.

Finally, we jumped over to the Forgotten Forest. After a shaky elevator drop down into a creepy cavern, I emerged into the woods to a host of strange and disturbing beings ‘living’ there. From demented dolls to bog queens, radioactive specters and spiders creeping around, this haunt had you turning in every direction to make sure you could see what was coming up next. I really appreciate how it felt like an obstacle course, forcing you to crouch, crawl, and balance through different scenes.

All in all, Brimstone made for a great spooky season experience. You can feel the amount of time and care they took with each attraction. There is a lot of passion that goes into places like this, especially behind the scenes. With a lot of other haunts you might spend two hours in line for a five-minute spook. But here you get your money’s worth. You can tell people are loving it when they run screaming out the exit before quickly getting in line for the next one!

Later this week we’ll take a look at the best places to take a beautiful photo at the Ohio Renaissance Festival! With the weather turning cooler, everyone will be out in full garb. So now is the perfect time to dress up and get that selfie for your Instagram!

Next Weekend is Barbarian Invasion!

Gather your hoard and raid the village! Special Guest this weekend: Albannach! Visit the blog Tuesday, October 15th for a rundown of the muscles, loincloths, and 80’s hair!