Love at Faire – Stories of Romance & Friendship at ORF

Love at Faire – Stories of Romance & Friendship at ORF 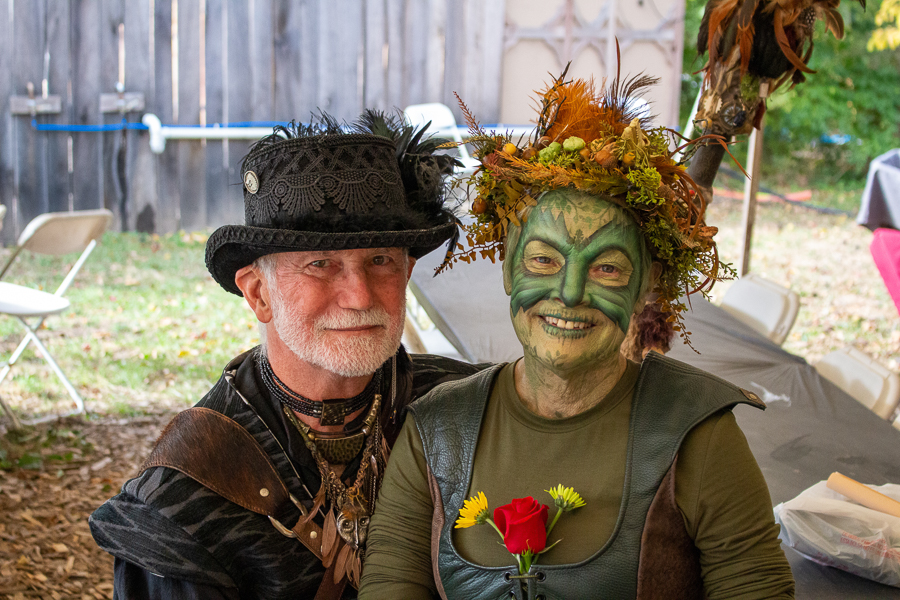 People don’t seem to like Valentine’s Day very much. I get it. In fact, it makes a lot of sense. We’re attached to an ideal version of how love happens. You meet someone and they smile and you smile, kismet happens and boom, soulmates. Even the most jaded and self-aware among us still holds out for the romantic ending of someone else who adores you and validates you as a person. This isn’t a bad thing to want. We’re meant to have human connections in whatever form that comes. But as we grow we begin to become disillusioned with the mythos of perfect love. We realize that to open ourselves up to another person on an intimate level is to risk being hurt. We deny ourselves the possibility of being known out of fear and insecurity.

And yes, this is getting really cerebral for a piece about finding love at a renaissance festival.

There is this perception of romance at ren faires. One which makes sense if you consider the free love era during which faires were conceived. I understand the perception. Rennies seem to share this oddly communal connection that lives and breathes as its own entity in a world where we are often detached from those we work with. This is because the faire environment works freely, allowing its participants to create meaningful friendships on their own terms. These aren’t just the people you work with. They are the people you care about. They become your ‘fairemily’.

Part of the building of a fairemily involves learning how to trust one another. Trust exercises, lessons in effective communication, and relying on one another are all a part of what happens when you have a group of people who are here because they want to be. So as friendships begin to build and you realize you’re surrounded by this amazing group of people who know you better than most anyone else, is it any surprise for romance and love to eventually enter the picture?

I don’t want to suggest that everyone in faire is in love with one another! We’re in love with the faire. But that avenue opens up a unique chance to find someone who embraces the weird and vulnerable parts of us as a deep friend or a romantic partner. You find people at faire who have maintained a deeply caring friendship that has lasted through more than one spouse. You find people who have found someone with whom they truly click, have built a family, and brought their great-grandchild to faire to be blessed by the Queen. You have faires loves, first loves, summer romances, and life-long companions.

When I think of Valentine’s Day, I think about all the ways we expect love to manifest in our lives. In doing this we overlook all the possibilities for love that we can open ourselves up to and find satisfaction from. To celebrate this year’s Valentine’s Day, I thought we’d take a look at some of the ways people have found love at the ren faire. The expression of human connection through celebration and joy.

I met my husband at the renaissance faire in KY back in 2016. I was helping out at a booth and he stopped in and we began chatting and just hit it off. A week later was our first date. Now, 3 1/2 years later, happily married with a 2-year-old daughter, plus my son from my prior marriage.

We met during lunch on the first day of auditions 4 years ago and have been best friends ever since!

Phil and I had our first date at the Ohio renaissance festival in 2013. It started out as friends going… but by 2014, we were dating. Every Sunday we’d go. In May of 2015, we decided to get engaged. I joked that we should do it at the Ohio renaissance festival using the swordsmen. I gave him a few weekends to choose from, but on September 17th, 2015 he proposed using the swordsmen. My engagement was blessed by the queen, and my family and best friend were there. We at this point had booked our wedding for pirate weekend in 2016. So on September 13, 2016 we married in the chapel of Willy-Nilly. We invited her majesty, who kindly interrupted our wedding. We fed our fairemily too. We are celebrating 4 years of marriage this year, 3 of them being on cast. This past year I got my traditional argent rose roses, but he surprised me with a cake too, to share with my fairemily.

Our love story is intertwined with faire. It’s my favorite place to be.

So my boyfriend(Dustin)and I met online and while browsing through my pictures he had a memory of seeing me in the pub at the end of the day three years ago. He now has garb that coordinates with mine that he bought off of a friend who wore the garb when he played Sir Walter Raleigh. The reason this is amusing is because while I was on cast I was Elizabeth Throckmorton so I guess you can say Lady Bess finally found her Raleigh. It’s not as cute as other people’s stories but the fact that he noticed me 3 years earlier in a crowded pub is kind of cute.

I met my spouse at ORF about 5 years ago. It was my VERY FIRST time at ORF and it was Time Travelers weekend. He was dressed as the 4th Doctor and I was dressed as the TARDIS. We became friends and from there when we were both single he asked me out. It was kinda meant to be. ? This is a picture of our first meeting.

Everyone that we are currently playing d&d with is associated in some way to faire! Josh Vance and Jon Pittman play with us along with a couple of friends I met while working on cast who come as patrons every year.

You may have your story start at faire

All you need to do to see for yourself how true this is is to come and experience the festival for a season. It isn’t just the cast and crew who form these bonds, but also the people who come through the gates just like everyone else and realize that they’ve just found their home. It’s nowhere near as hard as you think to become a part of our community and find something you want to share with those around you. Have a Happy Valentine’s/Galentines/Palentines Day!