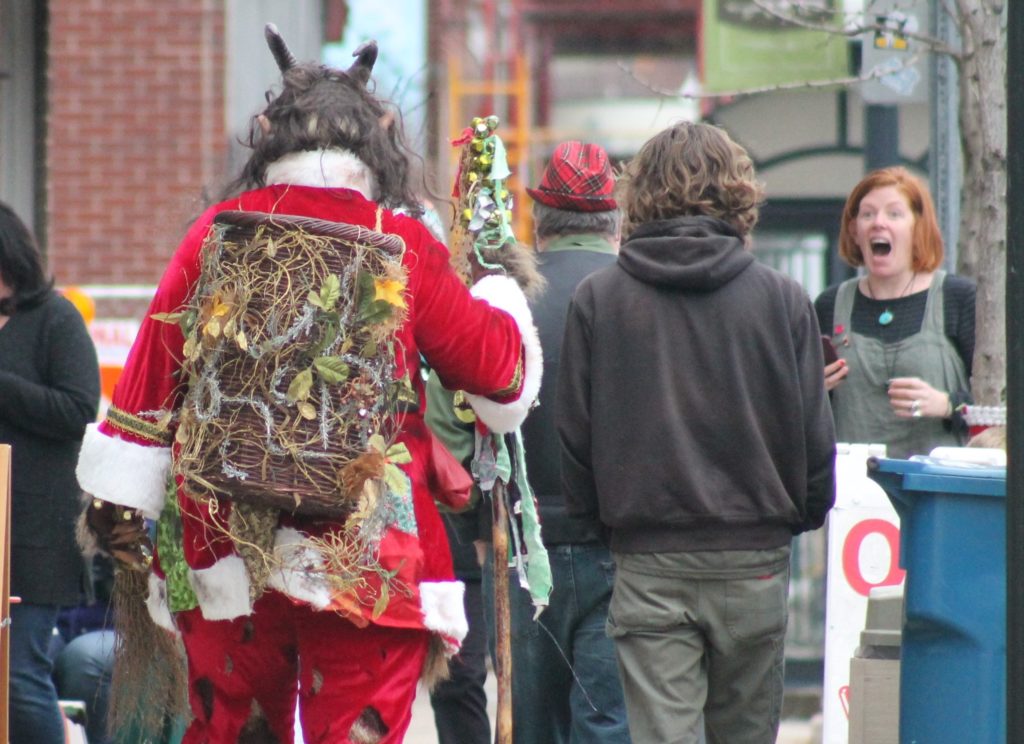 Amid the cheerful carol and jingling bells of the season, there is a shadowy figure which has seen a rise in popularity in recent years. Known as the Krampus, this strangely spooky figure harkens back to an era when the difference between naughty and nice meant a lot more than a lump of coal in your stocking. A devilish figure with a long history, Krampus visits those who were naughty during the year. Everything from whipping children with a birch bundle (birch being symbolically attached to purification) to stuffing them in a sack and taking them down to Hell is within his repertoire.

Krampusnacht (German – Krampus night), the dark holiday of the fiend himself, is celebrated on Dec 5th, right before the Catholic Feast of St. Nicholas on Dec 6th. Dozens of people dressed as the hairy beast wander through the street of many Northern European towns and cities, giving the crowds a fright and making a ruckus. Their job? To punish all the ‘naughty’ folk before St. Nicholas comes by the next night to reward the good. While it’s origins are much debated by scholars, in America this has translated into a counter-cultural movement, bringing Krampus to the forefront of the season.

The Merry Krampus is an annual event held at Strongwater Food and Spirits in Columbus, Ohio. This unique flea market features local artisans and crafters coming together to showcase their delightfully morbid creations. This is the best place to find that weird gift for your family or even a little something for yourself! They have hosted this event for two years running, bringing the delight of the macabre to the holidays.

I went to this event last year and had a blast! So I had to be sure to pay them a visit in 2019. I just love the exposed brick in this building and the nifty way in which they’re renovated and repurposed a century-old building in the Bottoms. The area has become a hub for a growing art and culture community in Ohio so it’s no surprise to find the area peppered with a growing community of the creatively minded.

It pays to arrive early because the Merry Krampus fills up quick! I had to buy a couple raffle tickets right out of the gate since the prizes are all donated from the vendors attending and the proceeds go towards the charity Merry Krampus sponsors, Colony Cats. Upon a dais all decorated with lights and a sparkling tree, Santa Claus and Krampus themselves share the spotlight, posing for pictures with children and adults alike. I’m surprised to see how quickly kids break into a smile and fearlessly run up on stage to take a picture with these two.

In the courtyard was a special attraction, a chance to write a letter to Krampus and explain your misdeeds through the year! One special (and lucky) kid would get a reprieve from the Krampus’s visit and instead find themselves with a special gift on their doorstep. I wonder how many kids took the opportunity!

But this is more than just a holiday market! Merry Krampus also supports Colony Cats (and dogs) a volunteer & non-profit organization that seeks to address the overpopulation problem in Ohio. They focus on public awareness and work with several vets to create affordable/low-cost spay and neuter options as well as TNR (Trap, Neuter, Release) for feral and stray animals. By partnering with Merry Krampus they help get the word out for their rescue/adoption center.

After meeting up with the IWG Local: 73, we headed over to the Global Gallery to participate in the Krampus Walk! Hosted by The Magical Druid, the Krampus Walk is a means of gathering together a community to ring in the season by dressing up as Krampus and shrieking their way through the neighborhood to the delight of the locals. With hoots and hollers, the crowd gathered at the coffee shop before marching down N. High St in Columbus.

Even through the chill and the rain, it was a lot of fun to be a part of this! Many came dressed up for the event, breaking out bell and whistles to draw attention. A lot of the shops in the area are small, independently run places that open their doors so people can watch the parade from the windows. Rock Candy Healing Stones was serving homemade cookies and hot chocolate for the passers-by and let me tell you I’d hike a mile in the snow for those meringue cookies!

After the walk ended we took the time to chat with Seamus, one of the men who organized the walk and owns the Magical Druid. They’ve hosted this event for a few years now, and it always has a good turn out. “It’s anti-commercialism, says Seamus. And he’s right! In recent years there has been a subtle pulling away from the glittering sales and bombardment of Christmas music that is inescapable during December. It’s not that people don’t want to enjoy the season anymore. It’s that we often feel it has become so wrapped up in the trapping that we find it difficult to appreciate the significance behind the holiday. Santa, the once jolly old elf who was the arbiter of children’s morality has become a symbol of the pressure to perform every year.

I know this comes off sounding rather Scrooge-y in tone. But to me, it shows that people out there, regardless of personal beliefs, still have a special place in their hearts for the holidays. They want the feeling of magic and joy that existed when they were children. Nobody wants to let go of what should be a time of comfort, joy, and community. And in its own weird way, the return of Krampus is helping to renew that feeling.

Watch our video exploring the Merry Krampus Flea Market and The Krampus Walk!