On Deck: The Pirates of ORF

On Deck: The Pirates of ORF 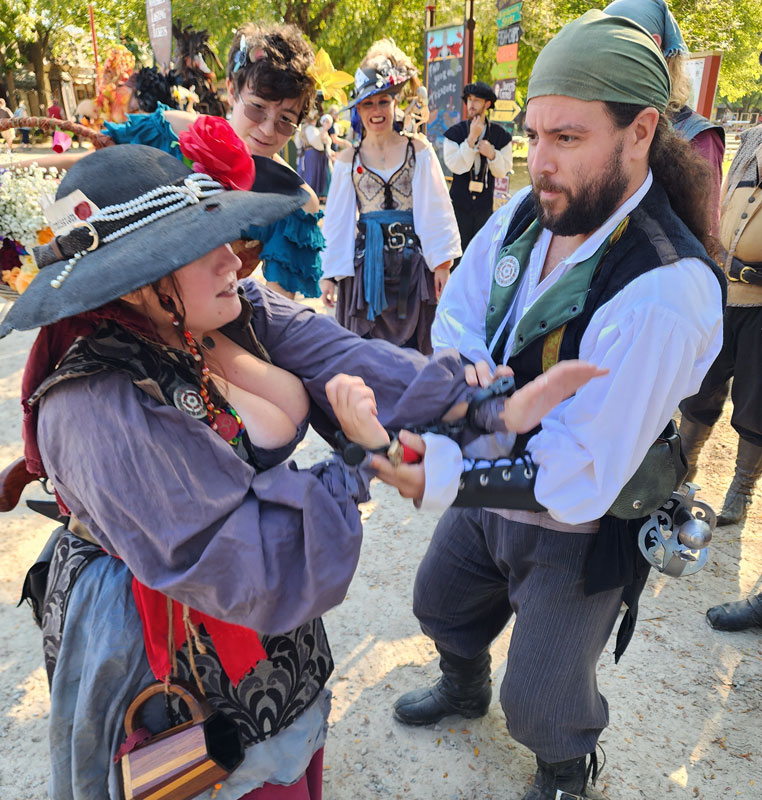 The Sea Dogs of Queen Elizabeth

Rollicking adventure, reallocation of wealth, and plenty of rum to go around. Today we look at these ragtag misfits with a sense of fondness for the freedom they inspire in us to take our life into our own hands and seek our fortunes in far-off lands. Being pirates or privateers of the 1500s was by no means an easy task, pitting those who took up the lifestyle against rival crews, royal naval fleets, and nature itself.

By the time England reached the reign of Queen Elizabeth I, they were already outmatched in maritime affairs by the dominance of Spain and Portugal. Elizabeth’s father, King Henry VIII, took it upon himself to improve the Royal Navy, increasing their allotment of ships and artillery. At the time, England sought alliances with Spain and France. But once Henry’s divorce from Catherine of Aragon cause him to break with the Catholic church, the crown became more concerned with defending England’s borders from attack than in attempting costly voyages across the ocean. In the subsequent years, King Henry took the naval fleet up to 100 ships, an expansion that would eventually give his daughter, Elizabeth, an advantage over their neighboring antagonists.

As neither Edward VI nor Mary took much of an interest in the maintenance of the fleet or seafaring, Spain and Portugal pressed their advantage. Their overseas trade brought silver, cloth, spices, and slaves from the New World, where they continued a bloody expansion of colonization. They had a solid foothold by the time Elizabeth took the throne in 1559, putting the English crown in danger of missing out on the riches that sea trade had to offer. Spain had a monopoly, and they weren’t exactly eager for their rivals to gain a foothold.

This was where Elizabeth’s Sea Dogs come in. Piracy was always a viable career for those sailors who had the misfortune of not being born well off enough to ever rise in the ranks. Most were simply seeking a means of survival by utilizing what they were already good at. With England’s enemy controlling the vast majority of trade by sea, it was time for the throne to support a little less than legal methods of obtaining their goods.

So then, what was the difference between a pirate and a privateer? In action, very little. The ships were cramped with little ventilation and a high likelihood of contracting disease. You were away from home for months if not years at a time, and assuming the conditions on board did not kill you, you could face your end at the mouth of a Spanish cannon, the law, or a hurricane. Piracy was illegal, a crime that carried heavy penalties if caught. At the very least you faced imprisonment and all of your ship’s cargo would be seized. If you had the misfortune of acquiring cargo from the wrong vessel, which was anyone with the money to send people after you, your seafaring days could come to an abrupt halt at the end of a hangman’s noose.

However, as a privateer, you knew what side your bread was buttered on. A letter of marque from Gloriana was all it took to take an honest thief and turn them into an auxiliary naval force. Provided that they stayed in the crown’s good favor, which was accomplished by sharing a portion of their profits with the English crown, a privateer could find himself raised from low-blood obscurity to the dignity of the court. Elizabeth granted lands, titles, and authority to her favorites, some of whom have gone down in history books as patriot-heroes. Even the crew could find their fortunes changed, as they were allowed to take whatever loot they could find provided it did not come from the assaulted vessels’ official cargo. Naval vessels did not permit these entrepreneurial thefts, and so in many ways, it was easier to find a crew for a privateer captain than a navy officer. Even ‘trafficking the pyrats’ was considered a minor offense, punishable by a fine and a slap on the wrist.

This venture brought England more than just ill-gotten booty. It made them a force to be reckoned with, giving Elizabeth the funds and power to expand her sea force so as to begin trade and colonization efforts of her own.

The Crew of the Walloping Walrus

No matter the weekend, no matter the theme, it would seem impossible to attend a renaissance festival without spying these scalawags in the lanes everywhere you go. The Ohio Renaissance Festival is no exception as the cast’s Pirate Guild spends every season crafting a memorable experience for all of our guests. But it’s much more than putting on a hat and carrying around a sword. There is a lot of work that goes on behind the scenes before you get to be on the crew of the Walloping Walrus.

Creating the look of a renaissance pirate is no easy feat. The 17th-century stylized visual of Robert Louis Stevenson’s Treasure Island is something we are all familiar with. Tricorn hats, long coats with buttons, ruffled shirts, and knee-high leather boots all seem to fit the image from Captain Hook to Stede Bonnet. This concept is about 200 years off from what the average Elizabethan privateer would have worn. Those who are brought into the Guild have to find a happy medium between historical accuracy and familiarity to the general audience that immediately reads as pirates no matter which of them you look at.

Very few pirates beyond the exceptionally famous would have been well known, which gives the cast a bit of freedom to create their own personas. Each member of the crew has a job on the ship, from the navigator to the cannoneer, the powder monkey, and the chef, and their character building needs to reflect that. You should know exactly what their position on the ship is just by taking a peek at them. Each crew member creates an individual appearance along with unity as a guild. They all seem to fit as if they really do belong on deck together.

Pirates also occupy a unique place in the village of Willy-Nilly. They can get away with a little more, their character being social outcasts of the time. They appeal to children and adults alike, which means that a lot of the crew takes on additional duties. One of the most significant of which is Fight Guild, which requires members to show up for extra practice while they learn how to handle stunt weapons and fight choreography. Chess match has a lot of the pirate crew involved, and the stunt show Carnival is made up of former or current cast members who took their training to the next level for a stage act. They sweat, bleed, and even get set on fire from time to time to bring entertainment to the crowds.

Their talents don’t end at the tip of a sword. Our pirates are practically their own choir, performing sea shanties with old and new tunes. The Wellerman may be popular now, but it would be well worth your time to learn other tunes like Eliza Lee, Rollin the Woodpile Down, and Leave Her Johnny if you want to keep up with the likes of the Wailing Walrus. Take some time before you head down the lanes to listen to pirates every morning right after Opening Gate. You can also catch them during Parade or at Pub Sing and end your day with a rousing song and a mug of cider.

Pirate Playtime is a truly special opportunity as the guild sets aside time for kids to come together on the chess field and join them in a few games. It’s wonderful to see how many kids show up, eager to participate and play along with other children they didn’t know two minutes ago. Their faces are lit up in sheer delight at these adults in pirate gear playing Tag or Duck, Duck, Goose with them. And in true pirate fashion, there is plenty of loot for everyone to share with inflatable swords, eye patches, and candy to take home. The crew seems to encourage a sense of adventure everywhere they go, their presence alone enough to bring delight to any scurvy mate they come across.

It’s no small thing to take on so much responsibility each weekend. Every guild at ORF pulls their weight and sometimes more because this place means something to them. So if you catch sight of our wild deckhands across the grounds, take a moment to grab a photo with them and get to know their character. You’ll be glad you did.