The Art of the Ren Faire Garb with Johnna Brough

The Art of the Ren Faire Garb with Johnna Brough 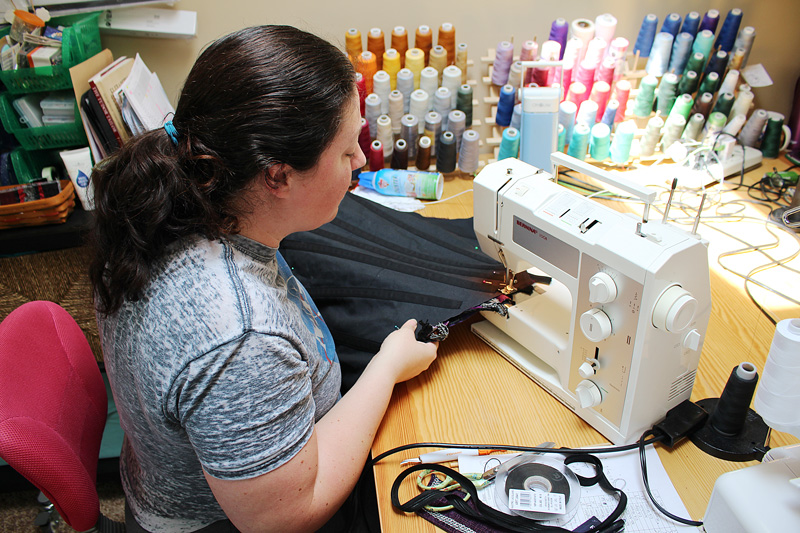 There is an undeniable sense of pageantry that comes along with the Ohio Renaissance Festival. Hours before the gates open – and in some cases, before the sun comes up – cast members and guests alike spend time crafting a look to present during the season. Much of this has been in the process for months ahead of time. Even a peasants garb can easily require weeks to be fully realized, so you have to wonder how long it takes to create something on the level of the Queen’s attire.

Garb : (noun) in this sense, garb refers to the period-appropriate sometimes anachronistic clothing worn by ren faire cast and playtrons.

The clothing of Elizabethan England is unmistakable. Sumptuary laws remained in place from 1568 – 1574, which established the fashion trends from the working class to the newly emboldened gentry, all the way up to the Queen herself. A layered look was appropriate for the damp, chilly English climate, resulting in a bump of the English wool trade which helped establish a prosperous nation.

For women, a narrow waist was achieved through the use of a bodice/corset which drew the torso into a conical ‘V’ shape. Hoop skirts created a bell-like appearance, with bum rolls that emphasized the detailed pleating along the back. Voluminous sleeves were common as well as ample ruffs made of lace. Hats, hoods, and snoods were essential, as was keeping one’s hair pinned neatly up if you were married.

When it came to men, there was no difference as to their desire for embellishment to show status. Corseting was used to achieve a slim waistline, and doublets were ubiquitous among the nobles and upper gentry. Codpieces were used along with breeches over stockings which announced a well-defined calf, while lower-class fellows could get away with more comfortable clothing such as cotton breeches, shirts and vests.

The fashion of the day followed the Queen. From her younger days as a flirtatious troublemaker to her empowered political domination, Elizabeth set the tone for what was correct. While the level of detailing and access to fabric changed from nobility to the working class, this silhouette remained prevalent, creating a distinctive appearance which is followed in most ren faires to this day.

During my first year at fair, I was not only broke, but I wasn’t sure if ORF was going to be a life long obsession or just a hobby. Looking back, I clearly should have known better. But at the time I was unwilling and unable to drop a lot of money on a suitable garb. I begged, borrowed and traded for the pieces I needed, and while the overall look was workable, it was a far cry from what I achieved the following year with the help of Costume Director, Johnna Brough.

Johnna Brough has been with the Ohio Renaissance Festival since she was about sixteen years old, though not always in the role of the seamstress. She was an active part of cast for many years as well as one of the lead singer for Wenches a Wailing & Jameson’s Folly. It wasn’t until the early 2000’s that she began crafting, drafting, and making garb for much of the ORF cast. Now she runs her own bespoke business which caters to ren faires, cosplay conventions, and Celtic dance recitals.

I dropped by her house in early July to begin my own bespoke commission, and to discuss what it takes to be a seamstress working in Elizabethan era fashions.

“I try to keep my spectrum within five years of 1572.” Johnna explains as we discuss reference points for renaissance festival garb. There is a certain degree of marketing and suspension of disbelief. The clothing [for cast] needs to be historically accurate, but also able to translate to the public consciousness as what they expect to see. “It needs to look cohesive, so everyone looks like they are part of the same village. It also needs to look organic and functional.”

There is a balance to consider, relative equality between creativity and function. Johnna assures me that you can not be satisfied by just cranking out the same basic pieces for everyone. It won’t work. It won’t look good. “There are trends that run year to year, a lot of it may be dependent upon what colors and textiles are popular.” Explains Johnna.

It’s true! During my two years on cast, we had a year where everybody wore some shade of blue. The following season, yellow made a big splash, especially with skirts. “That can make it difficult if you have someone who is after a specific shade that you just can’t find locally,” Johnna told me.

Each cast member puts a lot of work into developing their look, and it is often up to Johnna to help guides the newer cast into something functional but identifiable. “First-year members don’t generally have a lot of coin. So you work a lot with separate pieces and accessories to help create a good look,” Johnna explains of her process. A lot of the time veterans of cast help out the newbies with swap meets where they can either get garb at rock bottom prices or borrow it for a season to get things together. Johnna has even started a “Scholarship Garb” closet for new and dedicated cast. But once the play becomes passion you start to crave a bespoke garb all your own.

The Cost of Looking This Good

When ORF becomes something you just can’t live without (which it will) you’ll know it. The first signs happen subtly. You start making a Pintrest board of all the garb you’d just love you have. You look up patterns and, if you’re ambitious, you might even buy a few books like The Tudor Tailor to help you stay accurate. But once it gets down to bringing your vision to life, don’t be afraid to ask for help from a professional.

“People tend to look for what they associate with ren fair. You get a lot of Game of Thrones, Pirates of the Caribbean… There is a LOT of clothing inspired by The Tudors or Reign.” Johnna explains with a delighted smile. It’s all beautiful clothing, and people come up with some very interesting and creative pieces. But therein lies the difference between guests and cast. Guests make the look happen with whatever is available and it is amazing how much their craftiness can result in stunning looks. Cast often goes for broke, sometimes quite literally.

Good, quality work can get a bit pricey. But when you factor in the quality workmanship and labor it feels pretty reasonable. Especially if you don’t want to take on the process yourself. Even if you decide to go for the challenge of sewing garb, be prepared to make modifications to a pattern or even draft your own to fit you properly. Fabric is an expenditure and that doesn’t even count trim, beading, and embellishments. Below is an average breakdown for the cost per item for a basic peasant garb according to Johnna.

This means that for a basic Elizabethan Era peasant garb, expect to pay at least $370, not including boots and accessories. A good gentry outfit, which includes a great deal more fashion and accessories, will start at around $500. And if you wanna be seen in the company of the Queen, well that court garb can’t be had for less than $1000! ORF’s own Queen Elizabeth I stuns the crowds in a $2000 progress gown, and it’s clearly worth the expense.

It should be noted that not everyone can expect to put down that kind of money on the fly. If the ren faire isn’t your passion, you’re probably going to be a lot happier renting a costume or putting together something at home that’s more within your budget. People have done more with less and still brought forth some amazing work.

So why go bespoke? Why put forth the money and the effort? Well, for a lot of people faire has truly taken a special place in their life. It’s an opportunity to play pretend and feel truly at home within the village walls. Now you could do this easily enough with a Halloween costume, but there is something special about building a custom garb! As I worked with Johnna through the process of creating a new piece, we discussed what truly makes bespoke different.

Tailor-Made: For me, being plus size was a factor. I’m no seamstress, but I’ve taken on the challenges of making both casual and costumed pieces. Not only is it exhausting, but I’ve found that most patterns may say they are plus-sized, but they only go up to a U.S. 20. And – as a note – most pattern makers measurements differ from the current standard U.S. size chart. For instance, the popular pattern maker Mcall’s size 12 is 26.5″ at the waist while a size 12 jeans from True Religion are 33.5″ at the waist! So if you do choose a pattern study the size chart and do not feel bad if you have to go up a few sizes from the size you are used to buying in stores.

If I have to draft the pattern myself it is added hours with no promise that I was doing it correctly. A bespoke item will be made to fit you accurately, especially if you pick a local seamstress who can measure you in person.

Quality: I’ve bought cheap ‘corsets’ from online retailers before. They are frankly not capable of holding up for a season. They bow out at the waist, the boning is cheap plastic, and the stitching gives after a few months of wear. However, my double-sided bodice from Johnna has lasted seven years and is just now needing some minor patches. It still holds me up without fail and is comfortably fitted to my body. I’d even say it’s only gotten better with age!

One of a Kind: When you work with a seamstress you get to make choices about your piece that you can’t make when you order retail. Everything from fabric to composition can be discussed, altered, and built from the draft up. A lot of seamstresses love a challenge, but be open to their suggestions and take their advice. It comes from years of experience. This makes for a truly unique piece that will stand out in a crowd. This is especially valuable if you are a playtron working on a character of your very own.

Well on my way to being ready for opening day

One of my goals at ORF has always been to have a different garb to match every weekend theme. A tall order, no doubt. But I’m more on my way than you think. With careful planning, budgeting, and a timeline full garb is not unreachable. Many seamstresses do payment plans with a down payment to cover fabric costs. It also helps to contact your local costumers! Whenever it gets close to a faire season they are already tied up with work and might not be open to any new commissions for some time. Plan ahead, save a little every month, and if you have to do one piece every year so be it. Before you know it you’ll have a truly magnificent outfit to sashay your way down the aisles of ORF!

Garb From Around Faire