The First Years of ORF – With Rebecca Kostrach

The First Years of ORF – With Rebecca Kostrach 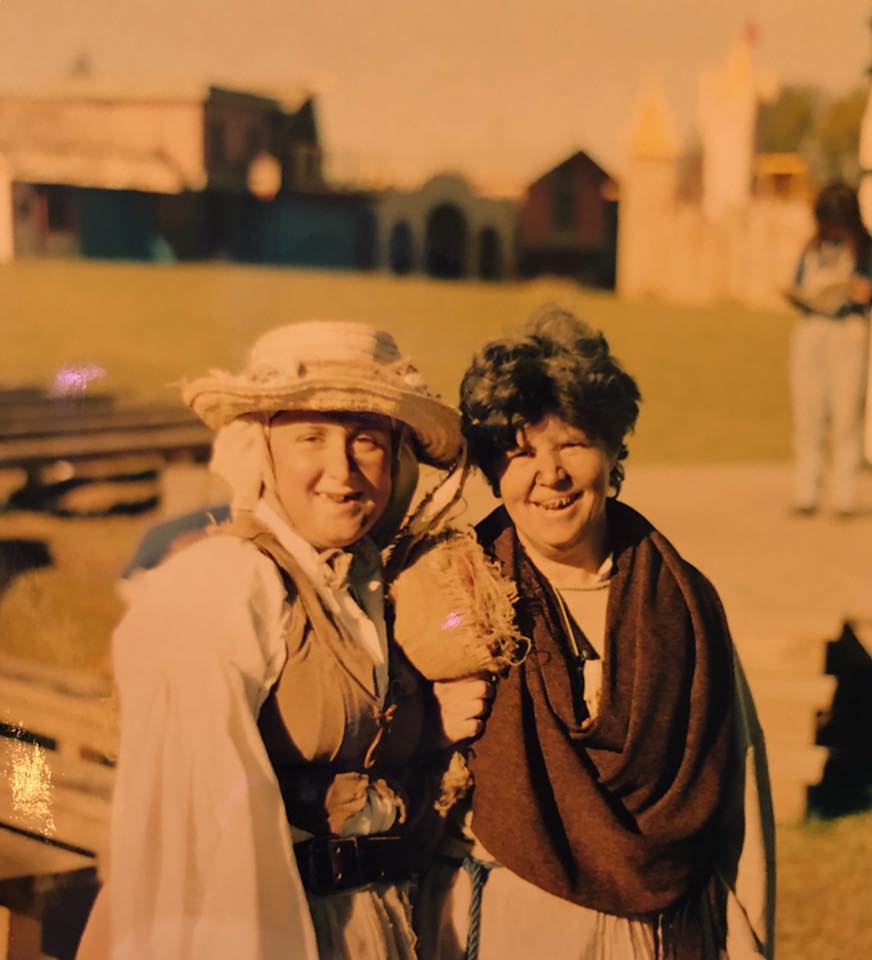 The thundering of hooves across the jousting list prompts the roar of the crowd as the lance splits into a dozen pieces. A knight falls from her steed, her armor shining in the sunlight as she clatters to the ground. A cloud of dust rises and the crowd holds its breath to see if she will stand to ride again. In the chapel on the hill, a young man kneels on a pillow as Queen Elizabeth herself lowers her sword to his shoulders. She proclaims him a prince of the land and he rises, now able to officially boss his sister around with impunity.

A young girl screams in delight as the dragon she is riding soars up into the sky. A man sees how much of a turkey leg he can fit into his mouth and still bite down. A young woman buys her very first sword and smiles as she wraps her hand around the hilt with confidence. Her grandfather, who just discovered his Scottish heritage, is now buying a kilt in his family’s colors. A wedding is about to start, and a parade of people are cheering to announce their arrival. These are the sights and sounds of the faire, and I wouldn’t be anywhere else for the world.

Come One, Come All!

For the 30th year in a row, the Ohio Renaissance Festival will be providing a wondrous environment for all of us to experience the Elizabethan era of Tudor England. Inaugurated in 1990, the faire has grown substantially since it’s inception with a host of new acts, artisans, and performers bringing life to the grounds with each passing season. From the Knights of Valour Jousting Troupe to the Kamikaze Fireflies, the beer wenches and the blacksmiths, ORF stands out among the summer/fall festivals that dot the Ohio Valley.

My first time visiting ORF was back in 2010, almost a decade ago! I fell in love so much that I came back year after year, eventually finding myself on cast for a brief stint and now writing the blog! To me, faire represents a found family, and I know I’m not the only one that feels this way. Yet, no faire starts out as such a powerhouse. As we count down the last few weeks before we celebrate ORF’s 30th season, let’s take a look back to the first few years of the festival. Back when it was just a few stages and a rag-tag group of dedicated performers in a field in the middle of Warren County.

A Trip Back In Time – An Interview With Rebecca Kostrach

In 1991, I was only six years old. The Simpsons were on television for their second season and Home Alone was popular, neither of which would my mother allow me to watch. I wouldn’t have known what a ren faire was if you asked me, nor would I know for many more years. But over a thousand miles away in Harveysburg Ohio Rebecca Kostrach was lacing up her corsets and getting ready for her first year at ORF.

Who was in charge back then?

Rebecca: Peter Carroll was co-owner of the Ohio Renaissance Festival with Jim Paradise. Gary Mazzu had worked with Jim Paradise at the Arizona Ren Faire and was brought on as the entertainment director for the first year. Paul and I had worked at the Southern California Pleasure Faire and had moved to Kentucky, where we were working as directors on that short-lived festival. We were recruited in the spring of 1991 by Peter Carroll and John Struchen, who was the ED at the Georgia Ren Faire, in which Peter also had an ownership interest. In the early years, Jim Camaquin was the Food and Beverage Director, Sharon Iaoccabucci was the Marketing Director, Carol Black was in charge of merchants, and there was a succession of site directors.

I can still feel the excitement of every first day of workshops!”

The little farmhouse on Brimstone was the festival office, with the old vet’s office/shed in the back serving as storage for costumes and props. During the fifth year when we were paving the parking area by the office and the city was going to let us name a new street off of Brimstone, the joke was that we would name it Hellfire so that we could say the festival was at the corner of Hellfire and Brimstone. That little office was so sleepy during most of the year, but once we came on site to begin auditions, training, and rehearsals, it was the place to be. I can still feel the excitement of every first day of workshops but learned never to be so excited that I forgot to check my hat for spiders. That shed was full of spiders and surrounded by snakes.

What kind of challenges did you face?

Rebecca: The site was not completely built and had few trees for shade. Water had to be brought in as the water on site was not potable. Very few acts had been contracted for 1991. Locals were suspicious of the whole thing, believing us to be some sort of hippie commune. We had fierce competition in the established fall faires for acts. We also had a pretty small budget for those first three years. 1990 had a Henry VIII/Anne Boyelyn theme, so we had to rework all the characters to bring it into the Elizabethan time period when we arrived in 1991.

The most difficult year was 1994. There were a lot of strong budget cuts and this created difficulty in hiring new, original acts.”

How big was the cast those first few years? Who were the stand out characters?

Rebecca: The entire cast (not including booth merchants) was about 150 strong in the first two years. In addition to the stage acts, we established guilds, with each guild having upwards of 20 performers. There was the merchant’s guild, the dance guild, washer wench guild, the musicians guild, gypsies, the local Willy-Nilly-on-the-Wash peasants guild, the Liar’s guild, the Landskenechts, the pirates, the Bones Band, and the royal court. A few stand out characters from those early years included Digby O’Greenhoe, Violet the Poet Gravedigger, the Village Liar, the Mayor, the Grande Fromage de la France, Elizabeth I, and the Goose Girl. One of our home-grown stage acts was Peasant’s Court, where peasants would bring their grievances before the Mayor for judgment. I used to love to dress up in costume and interrupt a stage performance with a little improv to keep the performers on their toes.

What years were the most difficult? How did faire make it through?

Rebecca: I think the first two years might have been the most difficult for Peter since the faire wasn’t yet showing a profit and he ended up having to buy his partner (Jim Paradise) out. Gary Mazzu was employed by Jim Paradise and left after the first year, which also created a void. Looking back on our first year (1991) the most difficult part was recruiting acts. Most well-known ren faire acts did not want to take a chance on a new faire in the event it went belly up. We had to create home-grown acts, some of which went on for years, and some of which died a quick death. It was a tremendous amount of work writing scripts, auditioning, and rehearsing stage shows as well as doing everything else. It was also an awful lot of fun.

How much did ORF change during your time there? How much in the years since?

Rebecca: Peter poured money into the faire site in those first five years in the way of buildings, stages, and landscaping. It proved to be a good investment as the site changed quickly over those first five years, each year better than the one before. We visited last year and it was sometimes hard to see that original site. Those baby trees we spent hours and hours planting now provide shade for performers and visitors alike.

Something that never changed was the camaraderie established during the faire year between the performers. We were welcomed last year by one and all, hugged so hard it hurt, and even shed a few tears. I fondly remember our years there.

If you looked back at this site when it first broke ground, you would barely recognize it. The seasonal festival has expanded into a park full of new attractions just waiting to be explored! From the year-round SunHenge that pays homage to the Neolithic structures of pre-Christian England to the thrilling twists of Brimestone Haunt that take place after the faire closes, it’s no wonder so many people return year after year for new adventures.

Every time a new guest walks through those castle gates, they are invited to share in a tradition that has been going on since the original Renaissance Pleasure Faire of Los Angeles back in 1960. Whenever a playtron returns after a far too long 10 month hiatus, they are greeted with hugs and enthusiasm. The only thing that stands between you and that is a short drive and a festival ticket!

So do yourself a favor, grab a season pass, check out #orfstories on Instagram, and maybe add a few pictures of your own this year. We’ll be waiting with “Huzzahs!” as we celebrate the 30th Season of the Ohio Renaissance Festival!

A Look Back in Photos

Special thanks to Lisa Dapper Butts, Lisa Nelsen-Woods, Mike Dunbar, and Rebecca Kostrach for the photos below. Names of the individuals in the photos provided when known.