The History of Santa

The History of Santa

Down the chimney, St. Nicholas came with a bound.

He was dressed all in fur, from his head to his foot,

And his clothes were all tarnished with ashes and soot;

A bundle of toys he had flung on his back,

And he looked like a peddler just opening his pack.

With a jingle of sleigh bells and a merry “Ho, ho, ho!” there is no more iconic figure than Santa Claus, the embodiment of the modern, secular holiday season. His image graces everything from cookie jars to soda cans, and he lives in the popular subconscious as a childhood figure of morality and belief. He is known by many names throughout the Western world; Sinterklaas (Netherlands), Father Christmas (Britain), and Père Noël (France). While each shares similar traits such as a love for gift giving and the sacred nature of the season, the many iterations of this mythical character draw from different points in history. Part saint, part spirit, there’s much more to Saint Nick than his red cap and eight tiny reindeer.

Saint Nicholas himself was a 4th-century bishop during the time of the Roman Empire. Much of his life is the subject of conjecture, as even the earliest writings about him did not exist until centuries after his death. Nicholas was Greek, born in the seaport city of Patara. This was a turbulent time in the Roman Empire, especially for Christians who were subject to extreme persecution under the reign of Emperor Diocletian (284 – 305).

It is said that Nicholas went on a pilgrimage of Egypt and Palestine, after which he returned to become a bishop in the church, following in the footsteps of his uncle. Among his most notable attributes was his generosity. After his parent’s death, he was said to have distributed their wealth to the poor. Some tales note of him bribing soldiers to spare innocent men from execution. One of his more famous stories involves a formerly wealthy merchant who, driven to destitution, meant to sell his three daughters into prostitution. Nicholas was appalled and spent several nights throwing bags of gold in the window as dowry for the girl so as to secure them a proper marriage.

While the historical accuracy of these tales is a subject of much disagreement between noted historians, the cult of this popular saint was widespread by the 6th century where he was lauded as the patron of sailors, merchants, archers, repentant thieves, children, brewers, pawnbrokers, unmarried people, and students.

Here is where we endure a bit of a time skip, as we jump forward twelve centuries to the reign of Henry VIII and the popular figure of Father Christmas. While the custom of feasting and celebration in midwinter was traditional long before this point, they did not have any shared personification. But in the mid-1400s, rector Richard Smart of Plymtree in Devon first penned down a carol for his congregation. This spoke of a fellow called ‘Sir Christemas’, who came to announce the birth of Christ and bid everyone to make merry in his presence. Thus entered the first Euro-Christian personification of Santa Claus, as a herald of the birth of Christ.

Many of the celebrations during this time had little to do with peace on earth or giving gifts to children. At this time, Christmas was a ribald celebration full of feasting, drinking, and pageantry, much of which still carried a taste of the old pagan celebrations that had come before. Characters such as the Lord of Misrule – an appointed officer of Christmas celebration – guided the festivities and caused some general mayhem and disruption. A lesser-known tradition of Yule and Yule’s Wife carried on for some time, drawing crowds as a married couple disguised themselves and caused a rucking as they danced and sang through the village. This practice was heavily condemned by local clergy, who felt it distracted people away from church services.

During this period, Christmas and Santa Claus were a far cry from how we see them today. The holiday more resembled a bacchanal, with liberal drinking, feasting, and carousing occurring during the long month of December. While the church looked upon these celebrations with a less than fond eye, the public adored it. It was a rowdy and joyful holiday that emphasized hospitality and plenty, and Father Christmas was its figurehead. In Summer’s Last Will & Testament, a 1592 play by Thomas Nashe, a miserly character is scolded for refusing to keep the season and celebrate with others.

“Christmas, how chance thou com’st not as the rest, / Accompanied with some music, or some song? / A merry carol would have graced thee well; / Thy ancestors have used it heretofore.”

After the Protestant church took hold of England in the 17th century, Christmas and thusly Father Christmas went underground. While many writers penned plays and stories defending the traditional celebrations against radical Protestant reform, from 1649 – 1660, Christmas was abolished along with other church festivities such as Easter.

The Royalists (those who supported the return of the monarchy to the throne), used this to their advantage, depicting Father Christmas as a symbol of the ‘good old days’ where cheer and revelry were encouraged. He was put in pamphlets and stage shows, mummers dressing the old-fashioned pageantry and performing scenes in which Father Christmas was arrested and put on trial. That’s right, the very plot of Miracle on 34th St goes all the way back to the 17th century, in which Santa Claus has to defend and justify his own right to exist.

After the Restoration in 1660 when Charles II took the crown, Father Christmas made his triumphant return and looked all the better for his long holiday. Described as ‘cherry–cheeked’ with ‘milky–white locks’, this figure of generosity and celebration was celebrated along with the return of the English monarchy.

While the 18th century saw a decline of the holiday’s popularity, Christmas enjoyed a revival during the 19th century. With Queen Victoria sitting on the throne and her Prince Consort Albert being of strong German lineage, there was a blending of traditions when it came to the winter holiday. The public consciousness underwent a change, and thus the imagery of Father Christmas altered to suit the people. He began to be depicted along with his myriad of children; Sir Loin, Wassail, Mumming, the Lord of Twelfth Night, and many others. He was often shown riding a Yule Goat, a Scandinavian tradition that hearkened back to old pagan roots of midwinter festivals.

But it wasn’t until Charles Dicken’s A Christmas Carol hit shelves in 1843 that the icon of Father Christmas cemented its place in the modern mindset and enduring culture of the holiday. Described as the Ghost of Christmas Present, surrounded by vast quantities of food, wearing a crown of holly, a green robe, and bathed in the warm glow of a torch, this portrayal dominated as the ideal sense of generosity and goodwill towards one fellow man for decades to come.

As Victorian Christmas began to morph into a less rowdy and more family-centered holiday, Father Christmas began to develop as a gift giver and symbol of childhood innocence. In 1895, a little girl from Lincolnshire wrote a letter to Father Christmas asking for a box of paints. Her note caught the attention of the Granthan Journal, who assured their readers that “the trustful little correspondent received her box of paints”. This is the first evidence of a child writing letters to Santa for a gift.

As with so many things, Santa Claus evolves in accordance with the needs of the people who believe in him. As immigrants crossed the Atlantic they brought with them the traditions of the Old World, including the icon of Christmas himself. The lore began to consolidate itself over time, taking root in the consciousness of the American public and blending into little pieces of folklore that have now become ubiquitous. As this continued over time, Father Christmas merged with the overall concept of the Americanized Santa Claus. His holly crown was replaced with a fur-lined hood, and his yew staff became a bag filled with presents. His green gown became red, which was standardized by the Coca-Cola company in 1931.

His lore has also undergone many alterations, with movies like Santa Claus is Coming to Town (Rankin/Bass, 1970), Santa Claus: The Movie (TriStar Pictures, 1985), The Santa Clause (Disney, 1994), Hogfather (The Mob, 2006), and Klaus (Netflix, 2019) exploring possible origin stories for the mysterious toymaker that comes to deliver presents once a year. But no matter how his story begins, it always comes to the same place. A faithful and enduring belief that every December 24th, as the sun sets, somewhere above us in the eternal blanket of the night sky, is a jolly old man in a great wooden sleigh, hauling presents enough to shower the world in the spirit of giving.

Santa has many representatives all over the world, and Yuletide Village is lucky to have our very own Woodland Santa at the St. Peter’s Chapel on the Upson Downs. With only one more week before the festival closes, we took a moment to chat with Paul Wannamacher, one of the jolly old elf’s distinguished assistants. 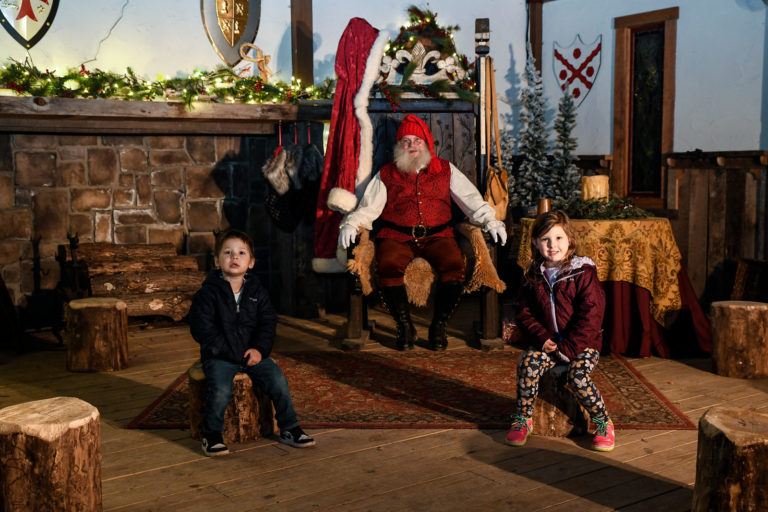 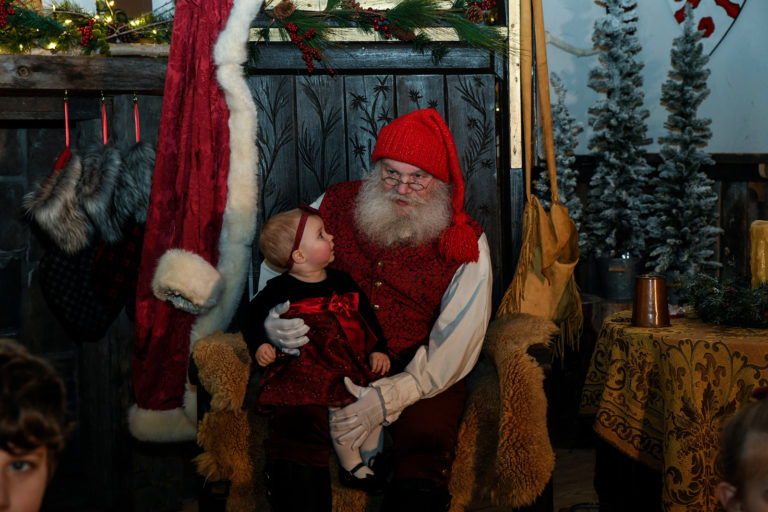 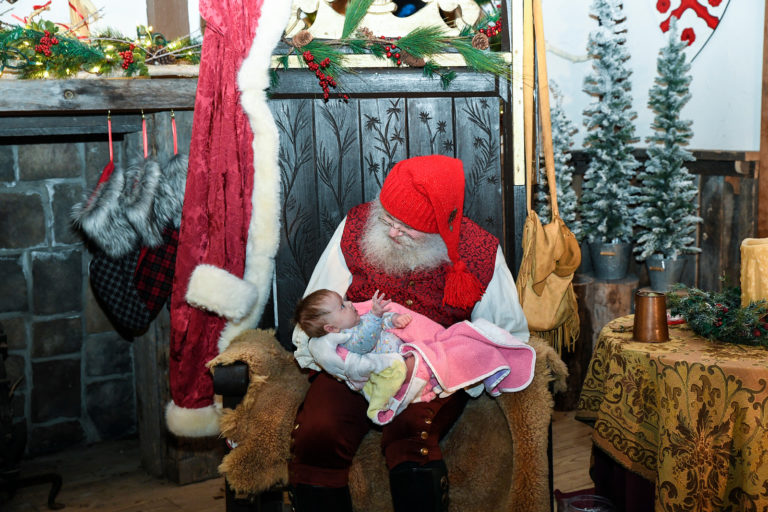 How long have you been doing this job?

I started doing some Santa stuff for Toys for Tots about 5 years ago. Made personal appearances for friends and family also. Only really started doing the whole Santa gig last year at the first Yuletide fest.

As Santa, what is the most important part of your work?

Probably the most important part of what I do is actually listening to what the kids have to say. Some can really surprise you with what they ask for.

What is your favorite part of the job?

Seeing all the Joy and Wonder in their faces, they can really light up when they see me!

How do you decide who is naughty and who is nice?

All kids are Nice at Christmas!

This is a very busy time of year for you. How are you enjoying your visit to Yuletide Village?

The people of the Yuletide village have been great! All the performers and the visitors have made this a really great experience! I’m so glad I’ve been asked to participate in such a wonderful experience!