The Medieval Period vs. The Renaissance

The Medieval Period vs. The Renaissance 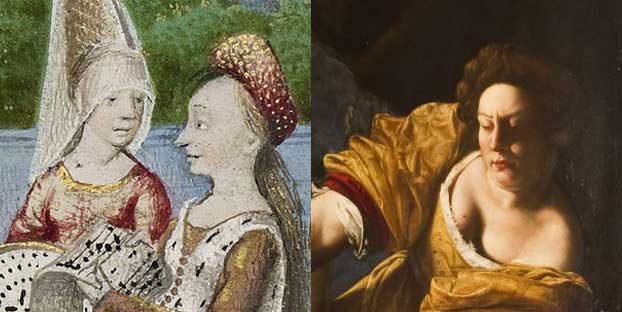 From Viking gatherings to pirate fests, fairy conventions, and cultural festivities, America has no shortage of faires and festivals to attend during the year. Renaissance faires are no exception. With a renewed interest in the mainstream cultural consciousness, we’ve seen everyone taking advantage of the renewed popularity and spreading the news by creating content through social media. I love seeing so many new people being introduced to the Rennie subculture, and I hope that these newcomers feel they have found a home away from home no matter which festival they attend.

However, there is one common misconception that needs to be cleared up: Medieval and Renaissance are NOT the same thing!

This is in no way a slight against medieval enthusiasts or faires that choose the era as their theme. Yet, these two historical periods are often lumped together as if they occurred at the same time as opposed to one after the other.

Granted, for many average faire -goers this isn’t that important. You just want to get dressed up, eat a turkey leg, and get your kid’s picture taken with the Queen. Also, it is important to note that historical periods were defined and named sometimes hundreds of years after they happened. People living in the 5th century would not have said they were in “Medieval Times.” And finally, rarely were historical periods experienced with firmly defined beginnings and ends for those experiencing them. There have definitely been events in history that were so momentous that those living through them felt the world change (I’m sure you could think of a few you’ve lived through). However, a lot of the time the linear nature of time makes change seem slow along with the constant march of years.

So, with those detractions noted, why have an article breaking down the two eras? Because knowledge is power! If you love the Ohio Renaissance Festival there is a good chance may find the study of history could be a great hobby for you. If nothing else, it might just help your kids pass their next history test.

To start with, the Medieval Era, also known as the Middle Ages, came before the Renaissance and lasted a lot longer as well. Starting in the 5th century and lasting until the late 15th century, that is roughly a thousand years, during which time came several historic events including but not limited to:

After which point came the Renaissance, lasting from roughly the early 15th century to the start of the 17th century. Though not as lengthy, the Renaissance was to be an age of massive transitions in politics, science, religion, and the economy.

While clothing for the common man did not always change too much, there are paintings and tapestries detailing the extensive amount of coin spent on clothing for those who could afford it.

Baring in mind that the middle ages comprised a wide length of time, the medieval garb of choice tended towards bulk, with yards of fabric being used to suggest wealth. The color of one’s cloth often denoted their status in society, while expensive additions such as fur trim and embroidery suggested one’s prosperity. Pleating and long coats were popular among men, while women favored flowing gowns with elaborate headpieces. If you think of the traditional ‘fairy tale princess’ with her sleeves reaching the ground and her conical headpiece, you wouldn’t be far off from a fashionable medieval lady!

The renaissance, however (depending upon which country you look at) included the strict application of sumptuary laws, dictating what one could or could not wear in accordance with their status. Corsets, or a ‘pair of bodies,’ made from silk were an absolute must regardless of gender. These garments were not tightly laced and while boning was common for the upper crust, the more common folk who had to labor could not afford such rigidity. The garment was kept stiff with starch. While women made ample use of wide skirts and trim waistlines, men favored tights to show off a well-turned ankle and a firmly fitted doublet or jerkin. The French style was considered immensely popular, with curved necklines and rounded crown-like hoods instead of towering chapeaus.

Surprisingly, during the early years of the Middle Ages, there was more of a variety in religion than one might expect. Pagan beliefs and customs were still practiced in many areas, though they often intermingled with the Christian influences sweeping the nation. So much so that many of those who might have referred to themselves as ‘Christians’ would not have been viewed as such by any official church of the time. Jewish scholars and merchants had a significant presence in rural areas, and once the Crusades began (and kept on going) Muslims and Christians had a substantial amount of interaction, and not all of them at the point of a sword as trade routes became established. The Cult of Mary even saw a rise in popularity, viewing the Virgin Mary as immaculate, born free of original sin, and was sometimes referred to as the ‘Queen of Heaven’. Though the orthodox church did all it could to eradicate and vilify many of these practices, they often appealed to the people under the Catholic church’s oppressive control.

During the Renaissance, the Catholic church was indomitable, with archbishops playing leading roles in the chambers of government. Bishops, who were most often sons of wealthy, noble families, were often set over a diocese, giving them a considerable amount of power over the area. However, their dominion, though powerful, was not absolute. More people were learning to read and write, and with a higher level of literacy came higher ideals. The rise of Humanism called the validity of the church’s teachings into question with its emphasis on the individual and the value of human beings. Martin Luther produced his Ninety-five theses and led the Protestant Reformation, causing a rift in the church and in the opinions of the people.

Artwork from the middle ages was largely religious, especially since the church was one of the few patrons with deep pockets. Illumination manuscripts, tapestries, architecture, mosaics, and metalworking were some of the most prolific mediums in which artists expressed themselves. With the Bible now playing a major role in the lives of the people, symbolism became more important and thus the works became more stylized. You have to remember that the vast majority of people were illiterate, so stories had to be told through visuals they could understand. There wasn’t a great deal of understanding regarding perspective, rendering the visual a bit ‘flat’, almost dipping into the uncanny valley. This was often overshadowed by the use of brilliant colors and expensive materials which would impress the audience.

During the renaissance period, art took a turn into more individualistic expression. A higher literacy rate along with philosophical shifts into Humanism created a vested interest in the commoner and portraits. Diversity in expression became more important as the world began to move away from the rigid structure of the church. This was also the first time in history in which a ‘middle-class’ was starting to rise. Commoners, meaning people with no noble bloodline, had money, and like most of the burgeoning well-to-do, they wanted to follow the trend of the wealthy by sponsoring artists. Inspiration was taken from the leftovers of the Roman empire, the focus shifting back to a more classical and well-developed visual style. This era developed artists from Botticelli to Bosch, Michelangelo to Artemisia, through whose works we see a highly developed sense of space and the introduction of chiaroscuro (strong contrasts between light and dark) into the art world.

The divergence between these eras does not end here. We could easily go into the shift of political and philosophical concepts, the expanse of trade routes crossing the continents, and the long-lasting effects it had on the native populations of the respective countries. I strongly encourage anyone reading this to take a moment and check out some of the links in the Bibliography to learn more about these eras and how they affect the future for centuries to come. It’s well worth the deep dive.

How many Crusades were there, and when did they take place?- Britannica

The 50 Most Important Events of the Middle Ages – Medievalists

Fashion in the Middle Ages – Smore