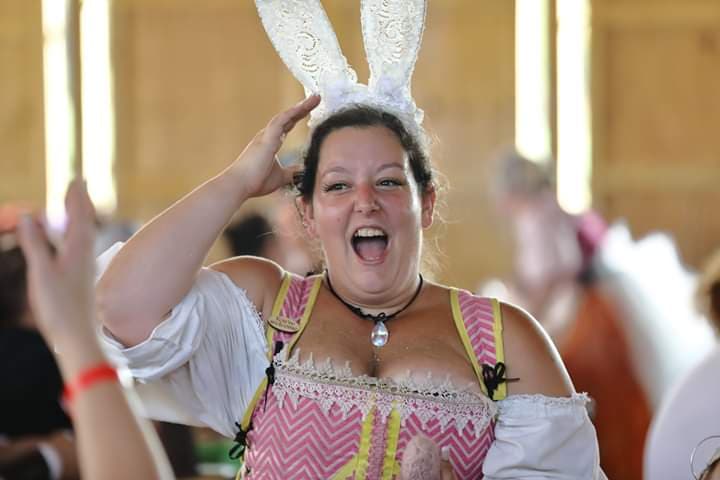 Bawdy humor has been a mainstay of the renaissance festival since its inception. The witty, tongue-in-cheek humor of the more open stage performances plays well with the adult crowd while soaring over the heads of the younger guests. Add in a few kilt spins, some tightly laced bodices and there’s a little something for everyone to enjoy. For this reason, many of the shows at ORF have ratings posted or announced at the start of a show for the consideration of parents who may not want their little ones asking what exactly is a ‘jingle bang‘ on the way home

From a historical context, King Henry VIII attempted to close the ‘stews’ of London in 1535, pushing most of these working women out on the streets to ply their trade. The ladies of easy virtue fared no better during the following reign of Queen Mary, and their fortunes improved only slightly under Queen Elizabeth I. Thus comes forth the Singing Sirens, an ‘acting’ troupe of lovely folk who entertain a general audience at the 3 Fools Pub. This merry gaggle, along with others, provides a variety show at the Dirty Duchess for the 18+ crowd looking to take in a few drinks away from the open lanes of the rest of the faire. They’re easy to spot at the ramp entry to the 1572, selling wristbands for the Naughty Bawdy Pub Show.

The Sirens were an experiment, the idea for our group was David Smith’s and he gave us loose guidelines for what he was looking for. We grew from the initial prompts and now have a solid stage show as well as the Naughty Bawdy. Looking back, we grew quickly but it definitely happened in stages. Our first year was just singing some songs back in Naughty Bawdy, then we were offered the Loreli stage the next season. The 3 Fools stage followed. Now we are growing with our fanbase, looking at what they want and listening. The Naughty Bawdy and the Sirens are growing and I feel a great sense of pride and gratitude for getting to be a part of it from the beginning and getting to share in its success.”

Today’s vet can be spotted by her pink corset and her lace ears, earning her the name “Bunny.” Bunny brings a bouncy sense of joy to the troupe, but her actress, Savonna Nerlinger, has been coming to faire since she was a tot.

I was introduced to the festival when I was little – 4 or 5 – I remember being enamored by fairy wings and afraid for the jousting knights and their horses. My mom said I cried but I don’t remember that part.
I participated as a patron. Ate the food, bought the stuff, prayed to the old and new that I could stay forever then they would kick us out.”

Like many vets, Savonna has been through more than one character at faire. It’s not at all unusual to wander around a bit until you find the one that suits your talents. Many start off as a part of the village cast, taking on the role of a non-historical character until they get their footing. For Savonna, that was the schoolmarm, Lettuce Poodleflogger. Lettuce did her best with the sadly under-educated residents of Willy-Nilly, but her teaching methods often left them in a more confused state than when they started! The character was delightfully foolish, a trait which was carried over when the Sirens began.

Bunny’s character creation steamed directly from the prompt of playing a woman of ill repute who is also an actress in a theater company. She has only known the party life and frivolity. She has no basis for understanding or learning anything else. Everything is a show and she is the star. She brings out traits I otherwise don’t possess. She is flirty and bold. Bunny can say things I would never have the courage to say. She is wildly full of herself while being kind and that is so fun to play. I love Bunny, she is the spirit I wished I had in real life.”

Many times in the past I have said that ORF allows for creative exploration of the self. It is escapism in its finest form, giving anyone who passes through the gates the opportunity to un-tether themselves from reality and create their own as they see fit. Characters like Bunny and the Sirens build through the seasons and are in development constantly, adding to their stories and making their own pocket life that comes out every year. These cast members are an inspiration, often bringing new people into the faire life just by being themselves.

I would like people to know that when they come to our festival they arent just experiencing people in funny-looking clothes with funny accents. They are sharing in our hope and in our dreams for a better and kinder, more silly world. We do this to spread laughter and happiness with the secret hope that when they leave, they too share that laughter and happiness with others. At least that’s how it is for me. I come back every year because I couldn’t ever imagine doing anything else. ORF is my home now.”

Looking to become a part of the village? Cast Auditions for the 2021 season are being held on Saturday, June 26th, and Sunday 27th! Looking for some more info or advice before auditioning? Read our Cast Auditions post and 10 Things to Know Before You Audition!