5 People Who Changed Elizabeth I Life

5 People Who Changed Elizabeth I Life 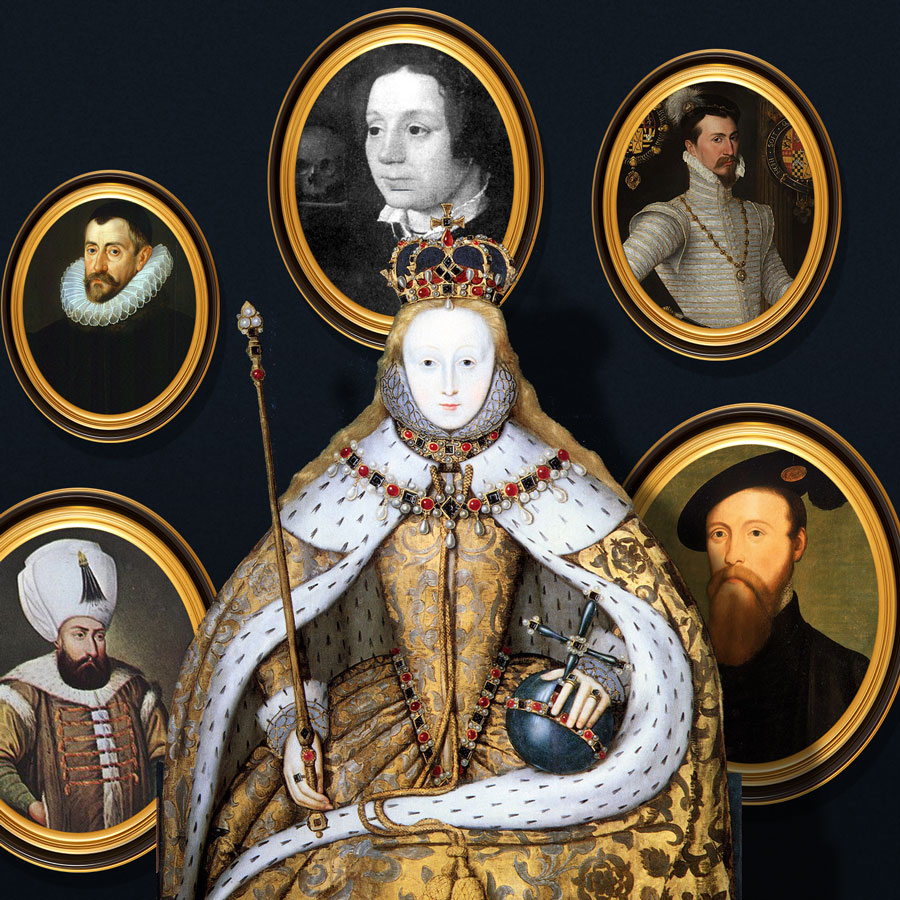 Throughout her life, people flocked to Elizabeth. Some sought alliances, others to fall into her favor. But only a few truly left an impact on her. From political allies to romantic partners, some stood out from the crowd and others who were most notable in their absence. I could easily have made a Top 10 list from this, but I decided to stick with the people I felt had the strongest impact on her life during times of turmoil.

Excommunicated from the Catholic church and surrounded by enemies, Queen Elizabeth was threatened politically and economically. Most of Europe was steadfast in its loyalty to Catholicism and had pretty much been told that if the Protestant queen were to be ousted, they would not be blamed by Heaven or God for removing her. Elizabeth needed to make good and profitable allies.

This is where Sultan Murad III came in. Known as a gracious ruler, he was well educated and multi-lingual. He was considered good-looking and was known for giving women a voice under his rule. During his correspondences with the English Queen, he stated that they had “much more in common than either did with Roman Catholicism, as both rejected the worship of idols”.

This alliance created an opportunity for imports to flood into English ports. Pearls, silk, rare dyes, confectioneries, and even language began to make an appearance. The relationship between the two nations was complex but beneficial. Both leaders were powerful, sophisticated and worldly. Though they never met face to face, Elizabeth (or “Sultana Isabel” as she was called by the Sultan) did send an ambassador to them in the 1580s to look after English interests.

Elizabeth’s early life must have been difficult. After her father, Henry VIII, became disenchanted with Anne Bolyn, he began to show attention to one of Anne’s maids. Jane Seymour was the sister to Thomas Seymour and, after the execution of Anne, became the third in a line of wives to Henry. Thomas Seymour was secure in his bid for power, something which would not pass even when his sister did. Two wives later, Catherine Parr would catch Henry’s attention and after his death, go on to marry Thomas Seymour and take charge of the young Princess Elizabeth. In a sense, he was her stepfather as he was married to the last wife of Elizabeth’s late father.

At the time, Elizabeth was a mere fourteen years old. Thomas Seymour became much too familiar with the young women for anyone’s liking, especially her protective governess Kat Ashley (more on her later). She decried Seymour for his actions and, after a while, it came to the point where even Catherine knew something was wrong. Elizabeth was sent away to live with Anthony Denny, a former member of her father’s Privy Chamber.

After his wife’s death from complications due to childbirth, Thomas Seymour turned his attentions back to Elizabeth and his ambitions. Elizabeth was clever and avoided him, eventually returning back to her house in Hatfield. Feeling his chances for advancement slip through his fingers, Seymour began to lean more on his relationship with the young King Edward. In January of 1549, he was caught trying to break into the young king’s apartments with a pistol. His possible assassination attempt was foiled when one of Edward’s favorite spaniels barked and Thomas shot it, waking the king.

Seymour ended up in the Tower of London and Elizabeth ended up under questioning. Some in the court believed that due to Seymour and Elizabeth’s close connections, Elizabeth might have been involved in the assassination attempt. Her servants were arrested, and Elizabeth herself was interrogated for weeks. She was sharp, brilliant, and cunning resulting in not only her release but the return of her servants. Seymour was destined for the ax and Elizabeth for the throne.

Ruling a country is no small task, and it is rarely accomplished by one person alone no matter how talented. Elizabeth was very clever as to who she placed in her council and even more careful as to who she gave her confidence. And few were more ingrained than Francis Walsingham, her Secretary of State and notorious spymaster. Walsingham was a shrewd, modest-looking man who had a keen sense of politics and policy. He was a master of espionage and hitched himself to England’s rising star with unwavering loyalty.

Walsingham worked closely with William Cecil, Elizabeth’s Lord High Treasurer. So closely that sometimes I have difficulty figuring out who is playing who in a movie until the actress playing the Queen calls them by name! They were adamant in their desire for a Britain united under Protestant rule. Throughout his tenure in Elizabeth’s court, he was instrumental in uncovering treachery, including the Ridolfi plot and the deciphered letter exposing Mary Stuart’s complacency in a plot to put her on England’s throne. He had seen horrors committed against the Huguenots during the St. Bartholomew’s Day Massacre and was determined to keep such acts from happening on English soil.

The man was a pillar of respectability despite his job description. While his duties were complicated he was invaluable to Elizabeth. He was up to the challenges of serving a determined and willful Queen. He was devout in his faith and made Elizabeth’s reign a secure one.

Oh, where to begin with Robert Dudley, 1st Earl of Leicester? Accused of everything from being a gold diggin’ lothario to outright murdering his own wife to clear a path to Elizabeth’s bower, Robert Dudley was none the less Elizabeth’s favorite until his death in 1588. He was a dangerous suitor, with both his father and grandfather being notorious traitors to the throne of England. His presence was often mired with disapproval and begrudging admittance.

Robert and Elizabeth had been friends during their childhood when Elizabeth was still considered an illegitimate daughter. They had been tutored together, and some even claim they shared a precocious sense of adventure and witticism. It was to Dudley that a young Elizabeth confessed that she would never marry, which is perhaps why he decided to cut his losses and seek a wife. However, he remained Elizabeth’s favorite, causing scandal and upset every time she turned her countenance on another for even a moment.

There is so much about their relationship that I could write several lengthy articles on it! But I will say this: for my part, I believe that Robert Dudley loved Elizabeth when she was Elizabeth. But loving a Queen, a Prince of England, was something different altogether. He was ambitious and often found himself weighing affection against personal advancement. In the end, he got second prize by wedding Lettice Knollys, Elizabeth’s 1st cousin, and sired a passel of children before his death. His step-son Robert Devereux would later become Elizabeth’s favorite, albeit with treasonous consequences.

For all my money this is a woman who does not get near enough acknowledgment in the history books! After Elizabeth fell out of the line of succession following her mother’s beheading and her father sired a son, Edward, Elizabeth’s governess was moved to serve her new young brother. Kat Ashley would become the little girl’s governess when she was only four, and in the following decades would become the closest thing to a mother, sister, and true confidant that Elizabeth could have.

For a person of no great renown who is all but absent from most history books and media, Elizabeth may owe much of her grit and skill to this woman! Kat gave the young girl an education in everything from geography and mathematics to language, embroidery, and horseback riding. The Queen would later declare that Kat Ashley took “great labour and pain in bringing of me up in learning and honesty.”

Beyond that, Kat was one of Elizabeth’s most staunch defenders, putting herself between the 14-year-old and the disturbing attentions of Thomas Seymour. She was briefly allowed to attend Elizabeth during her stay in the Tower of London only to be ripped apart again and placed in a different prison.

Once Elizabeth became Queen, she appointed her governess to First Lady of the Bedchamber, a considerable leap in status! She would later marry and her husband would find prominence within the Queen’s household. Yet she never had any children of her own. Perhaps Elizabeth was all the daughter she needed. And Elizabeth, who ‘loved’ few people and trusted even fewer, surely returned the sentiment as she said: “Anne Boleyn gave me life, but Kat Ashley gave me love.”

Some of these people are remembered as strong, dynamic figures of history. Others are more notorious than respected. But each one provided Elizabeth with something essential to her reign. Sultan Murad provided a stable alliance when the rest of Europe turned its back on her. Thomas Seymour taught her a powerful lesson in how others would utilize her if given the opportunity. Walsingham provided a staunch supporter against the forces who worked against her. Robert Dudley was a reminder of how to manipulate situations (and suitors) to her advantage. But it was Kat Ashley who provided her love and support throughout many years.

Take some time to research other notable figured in Elizabeth’s lifetime such as:

August 9 – 10 the Ohio Renaissance Festival grounds will host the Bellwether Music Festival a two-day, three-stage alternative music festival with camping! Come back to the ORF Blog Tuesday August 13 for the lowdown!