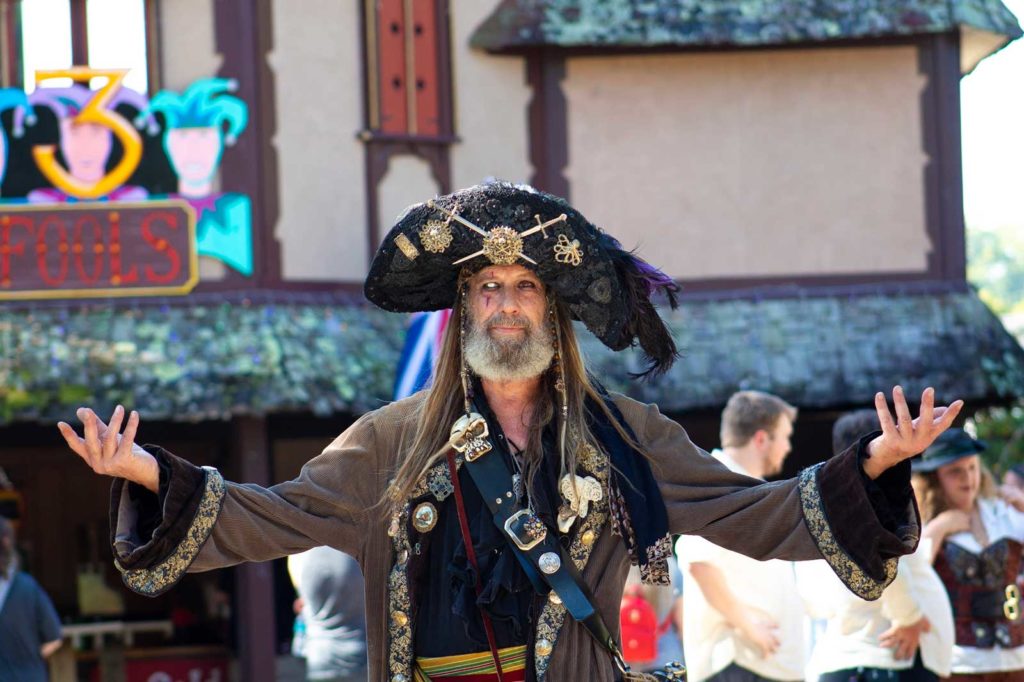 I’ve never known anyone who didn’t have a pirate phase. Maybe it’s because Pirates of the Caribbean came out in 2003 when I was just about eighteen, which makes it all the more surreal that eighteen years later there is a PotC 6 in the works.

I remember being obsessed with that movie and the storytelling of the original trilogy and I was not the only one. It was fantasy. It was an adventure. It was a D&D campaign come to life on the high seas. Now in 2021, it should come as no big surprise that Pirate Weekend is one of the most popular themes at the Ohio Renaissance Festival.

PotC takes place in the mid-1700s, a little over two hundred years after the Elizabethan Era of renaissance England. We think of these swashbuckling rogues as daring protagonists but in reality, piracy was a difficult and risky undertaking. In the 1500s the world was undergoing an age of exploration, at least from the Eurocentric viewpoint. Travel to India, Southeast Asia, and the Americas was becoming more frequent and thus more profitable, urging on intense rivalries between countries that sought to gain a foothold in these areas. The want of spices, silks, colonization, and slaves promoted these expeditions, leading many experienced sailors to take advantage of the trade routes for a less-than-legal method of obtaining wealth.

Pirates were both feared and glorified. While some worked as independent agents, others with sufficient reputation and courtly connections could find themselves renamed ‘privateers’ to Her Majesty Queen Elizabeth I, impeding the progress of Spanish ships so that England could gain the advantage. One of the most notorious sea-dogs was Sir Francis Drake, who prowled the Spanish Main (the coastal regions of the Caribbean and South America), cracking down on Spanish ships and returning with the loot to England. His work eventually earned him a knighthood, mayoral appointment, and a command of the English fleet. His greatest achievement by far was his defeat of the Spanish Armada in 1588, cementing his place in the annals of history.

Others took advantage of the economic warfare of Europe’s ruling powers to peruse their own means. Gráinne Ní Mháille (1530 – 1603), better known by her Anglicized named of Grace O’Malley, was a ferocious force of the Irish political landscape and a consummate harasser of English vessels. Her infamous meeting with Queen Elizabeth I came after her capture at the hands of Sir Richard Bingham, the naval command who had been given control of Connacht after the Tudor ‘conquest’ of Ireland. When Gráinne heard of the capture of her brother and sons, she petitioned Elizabeth for their release, as well as the return of her lands, which had been granted to Bingham. While the queen granted the release of her sons, provided that O’Malley ceased her rebellion again the crown, Grace eventually realized that the land of Connacht would not be returned to Irish control, and thus began her support of Irish insurgents against England.

The tale of pirates does not begin or end with Europe. The wokou of Japan made it as far as the Philippines, pushing them into conflict against Spanish soldiers and even attempted to set up a pirate state in Pangasinan before Spanish forces and Ming Dynasty crackdowns forced a retreat in the later 1600s. Ottoman corsairs sailed the seas of North Africa along the Barbary Coast, making their living off the booty taken from Spanish and Portuguese ships. They were noted for their utter domination of the maritime, serving as everything from admirals to conquerors before the end of the 16th century.

While the Golden Age of Piracy would not officially begin until 1650, the groundwork laid by its predecessors would create a complex network of economic trade, exploration, and war that would establish the relationships between countries for centuries to come. While the much-beloved fantasy continues to delight the imagination and excite creativity to this day, being a pirate was far more than peg-legs and treasure maps.

Crew of the Bewildered Banshee

Every year the pirate ship of Willy Nilly (also known as the Shipwreck Stage) is renamed to support the returning and oncoming crew that will call her home during the run of the festival. This year she has been dubbed the Bewildered Banshee, supporting a hefty crew out for daring fun on the high seas. Many are drawn to the promise of a life spent adventuring in foreign ports, free from the restrains of the landlubbers.

Officially, there are no ‘pirates’ in the village, only Her Majesties privateers, sailors commissioned under the crown and working under the general command of Sir Francis Drake. While the crew may change a few faces here and there, the Pirate’s Guild of ORF maintains a steadfast interpersonal relationship with the veterans teaching the newbies how to get into the swing of things.

When I joined the pirate guild this year it was like joining a family. Everyone welcomed me with open arms and made me feel like I have always been a part of the crew. They went out of their way to make me welcome and actually helped me pull together some essential garb accessories. We do a lot of things together like morning shanties and songs, crashing court dance, our lunch charcueterie, chess match, and of course, pub sing. I like knowing that you always have your crew to hang out with. We have created a special bond in doing that.

One of the biggest things about being a pirate is that you are always ‘on’. It’s one of those guilds that people tend to come to see. You don’t think about a renaissance festival without pirates right? In our guild, we are some of the most seasoned veterans who know what it takes to entertain. Being a pirate is definitely a treasure, and I try to earn it by going the extra mile and hitting it hard every day. We have some if the most dedicated fighters, a lot of MUM (Made Up Mayhem) actors, talented singers and dancers, and even the casting coordinator! We have a spotlight on us, so we set an example for not only each other, but the whole cast. What I love most is that at our core- we are truly a crew. 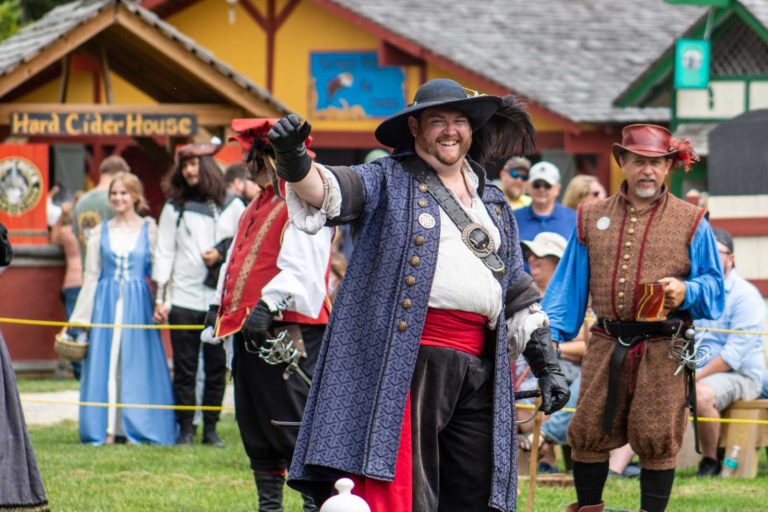 The captain of the Bewildered Banshee take the field! 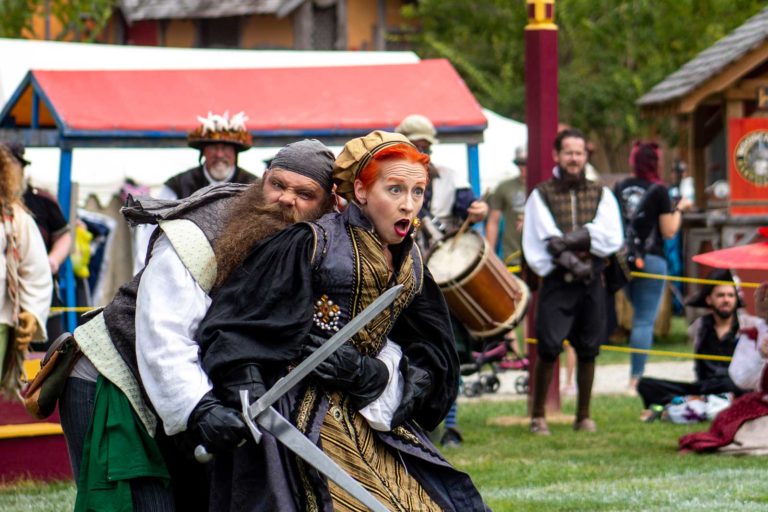 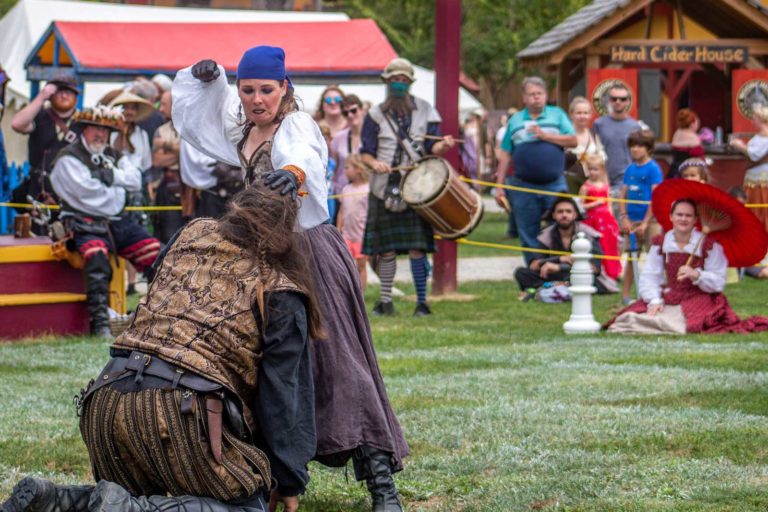 Malarky & Sir Francis Drake duke it out on the Chess Field. 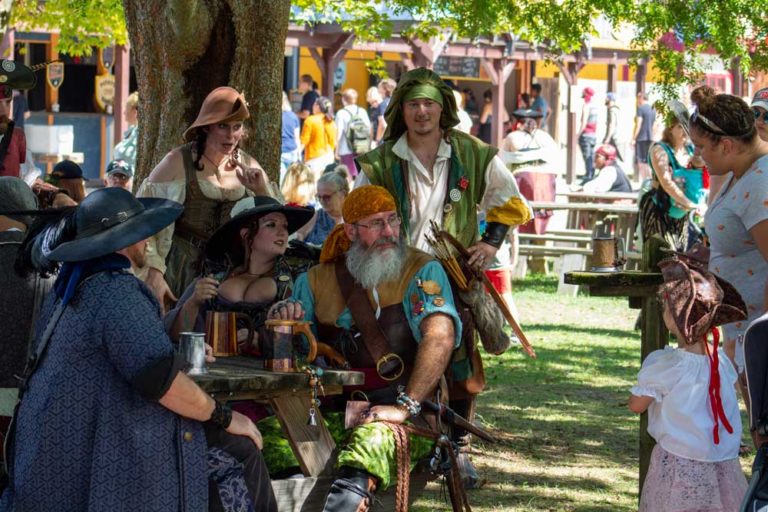 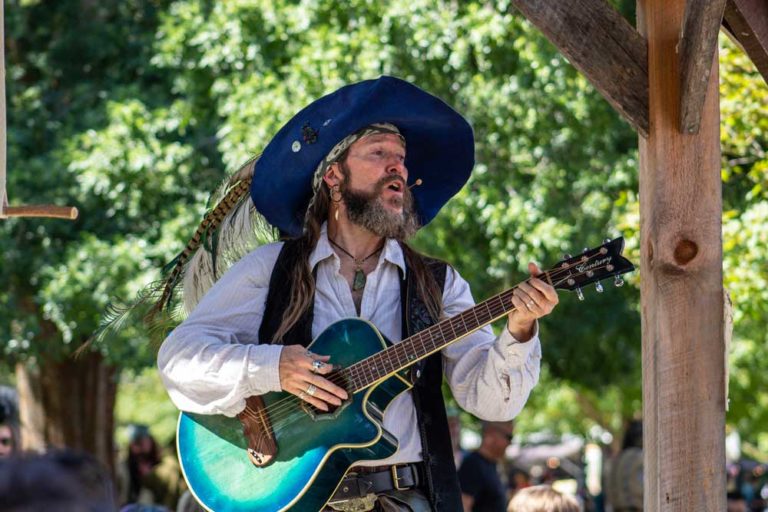 Robert the Baard at the Rose & Crown 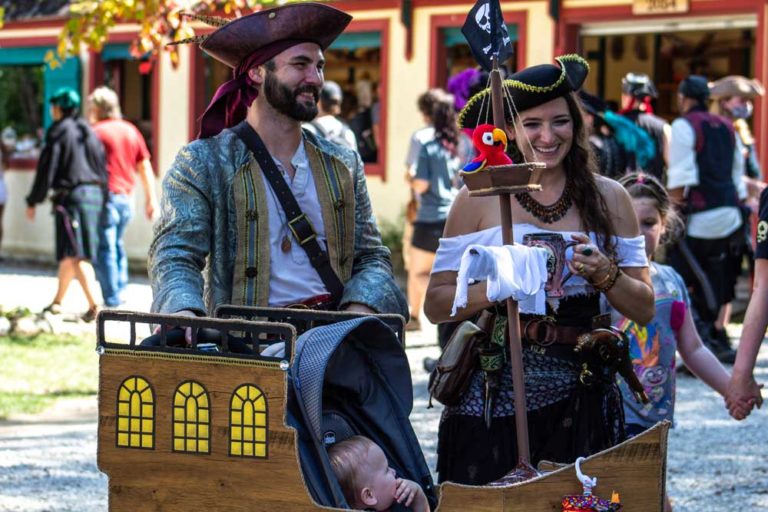 A young captain surveys his crew! 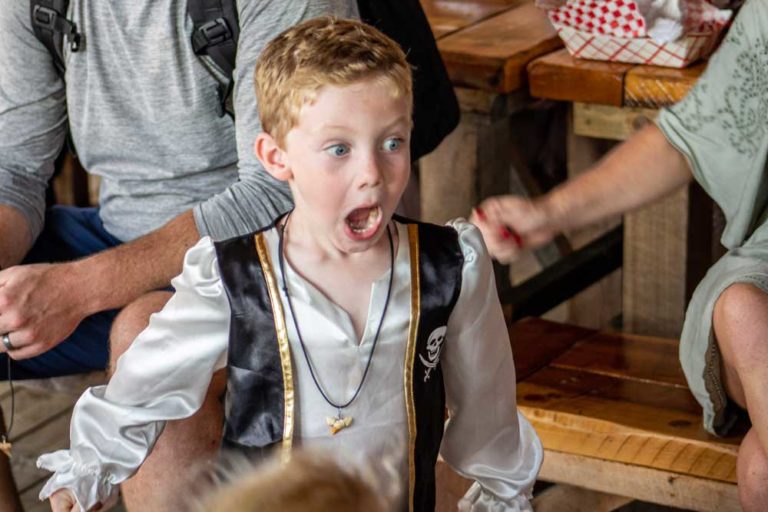 Who let the cabin boy have candy? 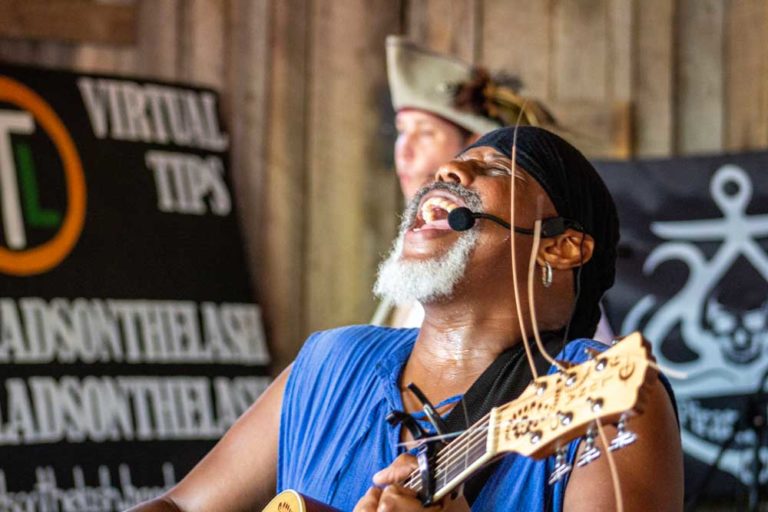 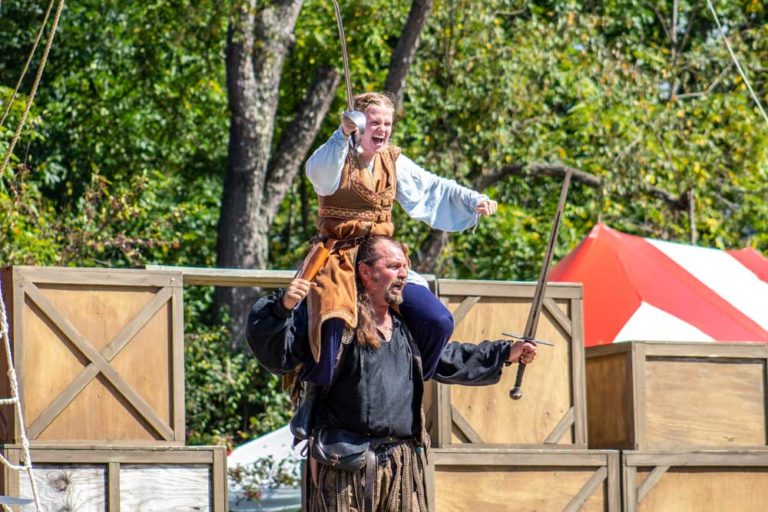 When in doubt, more weapons!