The Art of the Scare | Brimstone Haunt Turned Me Into a Monster!

The Art of the Scare | Brimstone Haunt Turned Me Into a Monster! 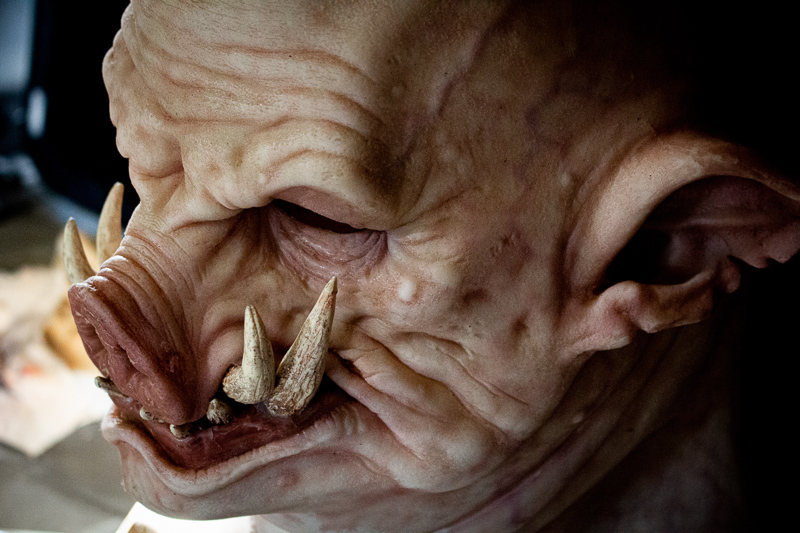 There is a theory being tossed around the internet which states that the human mind needs fear. What was once an essential part of our survival instincts in a dangerous world now lies dormant in the relative ‘safety’ of the modern era. We don’t experience fear in our regular lives outside of the increasing sense of existential dread prevalent in the modern world. In lieu of this, we create sources of fear, allowing ourselves to experience that fight or flight response and give our minds the stimulation it is hard wired for. This is why the entire horror genre exists. From books to movies, podcasts to the haunt, we want to be afraid in a way that we can experience, process, and move on from.

Tl’dr: This is all a very theoretical way of saying ‘It’s fun to get scared!’

One of my favorite things about this job are the things I get the opportunity to do. Experiences that are not only unique but irreplaceable. I’m always grateful for the people who let me get a glimpse behind the scenes and participate in what it takes to make faires and festivals happen. So when Brimstone Haunt got a hold of me and asked me if I was up to coming in and getting my makeup done, I was all for it!

In a little barn in the middle of a cornfield lies the makeup department of Brimstone Haunt. Masks and prosthetic lay around in the chaos of the haunting season, waiting to be placed on the myriad of actors set to frighten the daylights out of you. But there is a method to the madness, as make-up artist Jeannie Steele explained to me while I stripped my jewelry off for our appointment.

Jeannie: “I started out acting at Land of Illusion in 2008. I showed up in my own makeup, very colorful, and they right away said ‘You guys are clowns!’ As soon as we got into here they had a ton of make-up artists doing everybody’s makeup and I just got kinda close with Becca, one of their artists. She started showing me how to do some of the basics.”

She showed me around the accouterments, displaying a book of hand-made prosthetic she had created herself for their needs. I was fascinated by the level of detailing she had created here. The gory protrusion of sharp teeth and desiccated scar tissue really attracted my attention as we had discussed the possibility of me having extra teeth for my look.

As she piles on the latex to improve my scare-factor, we gabbed around for a bit. I have a fascination with horror makeup artists. Out of anything you could do with that skill set, why horror? Why seek out a career path that entails detailing blood drops and deformed corpses as a part of your job description? The conclusion we came to was that it involves being able to think outside the box. Being a haunter allows you to indulge in a bit of fantasy escapism. You can express yourself in a way that you aren’t allowed to in your regular 9-5 job. You are allowed to be morbidly creative, and even hedonistic in your self-expression, and it’s all done in a safe environment.

The smell of chili and cornbread drifts in as the other actors begin to arrive and a flurry of activity picks up. With only a little over two hours before the gates open, there is plenty to do. People grab a bowl while they wait for their turn in the chair, and the cry of “Who’s got my blood?” seems commonplace here. Once my own makeup was finished I sat back to chat it up with a few of the other scarers, I asked around, prodding to see what kind of inspiration they use to create these characters and get them to shine.

I live for the crazy old lady motif. Creepy laughter, letting them get distracted before I jump out at them and give them a last-minute big scare!”

I saw a lot of willingness to explore their characters. There is a need to embrace this insanity, grab hold of horror with both hands and fling yourself wildly into the moment. It isn’t without artistry. They practice their movements, discussing lines they want to try and ideas they have for how to get the best reactions from their ‘victims’. They’re actors, and they take their job seriously. Many people were more than willing to share some of their tips with me as I prepared to spend a few hours in the Forgotten Forest (one of Brimestone Haunt’s four attractions) with them.

I wanted to do it for years. Marc Maeder hooked me up. We’ve known each other since school. I’ve always been a little bit creepy so this was right up my ally.”

As we the tractor slowly pulled us to our haunted destination, I asked my fellow haunters for the night for some advice. There seemed to be 5 big ‘rules’ everyone agreed with.

“Boo” doesn’t work and it’s not scary. It takes people out of the environment you’ve gone to so much trouble to create. You want to keep them in the haunt, which is separate from the rest of the world. “Boo” is for kids going trick or treat. Find a motif that works for you and play to it. Don’t be afraid to take chances and see what works.

If you have a station, take a little time and wander it. Know how to use it to your advantage. Where can you hide? Where can you pop out of? Can they see you before they enter your area? Can you use a corner to place a distraction? Can you rattle the walls or bang on them to make loud noises? Figure it out and work it.

Brimstone is not a ‘touch’ haunt. You don’t touch the actors and they don’t touch you. But it’s more than that. You need to know what you can and can’t do and where that line is. Being a scarer is supposed to be fun and entertaining. Scary? Yes, Frightening? Of course! But don’t say things that you know are going to intentionally hurt someone.

Scarers are frequently out in their haunt location for hours at a shot. You can leave if you need to use the bathroom or in an emergency, but you don’t want to leave your spot unattended for long. Not to mention that it gets super cold this time of year. Pack a bag with things like snacks, energy drinks, hand warmers, and cough drops so you have it if you need it. Some extra blood and spirit gum don’t hurt either in case your prosthetic comes loose.

Not everyone gets scared during a haunt. At the end of the day, this is entertainment. So if you have someone come through who doesn’t seem that enthused or insists on making a pithy come back, do what you can to make them laugh! A big scream is a lot of fun, but what really matters is that your ‘victim’ leaves having enjoyed the experience.

We loaded up onto the tractors as the sun set calmly over the fields. It took us around the back, letting people off at their designated posts. I was delighted to try this out for myself, but it would be a lie if I said I wasn’t nervous. I went through the Forgotten Forest a few weeks ago as a guest, but now I was on the other side of things. Most of the others had a place they were set up, but I wasn’t 100% certain where I would fit in with my punk demon/fairy look.

Low and behold, there was an empty spot with some deliciously gruesome decor! Peeled bodies hanging from the walls, drying meat swinging from strings and plenty of blood smeared all over. I spent about fifteen minutes taking a look around and experimenting as my stomach did flip-flops and I tried to decide what I should say or do. I realized pretty quickly that I could hide around the corner of the walls and see people coming with enough time to get into position. I could jump out as they entered or stand back against the corner and let the strobe light disorient them before I lunged. I did a few practice runs, trying out a few lines to see what came out best and what felt right to me. Before I knew it the trail was open and I was lying in wait!

I was not expecting the exhilaration that came with the first really good scare! That moment when some six-foot-tall dude shrieks and almost trips over his own feet was a thrill I had not been ready for. I popped out at different places and found ways to make even reluctant wanderers feel somewhat wary while I had them. They were right to say there is a freedom in taking that moment and making it your own, captivating your audience to give them the rush of being frightened in a relatively safe environment.

It was so much fun to hear other scarers catch someone off guard, the screams breezing through the trees as people tread the old paths of the Forgotten Forest. Even as I headed off for the night I delighted in seeing people come running out of the exits, laughing as they hit the grass and breathless as the chainsaw revved up behind them. It made me revisit the notion that somewhere deep in the recesses of our animal instincts, we need the reaction provoking stimulation a good scare offers. Either from the thrill of being afraid or the release of being the one causing that fear. It is a shared human experience, and an underrated one at that. All you have to do is look at the happy faces of the people at Brimstone Haunt to know it’s true.

BrimStone Haunts last run of 2019 is THIS weekend October 25 and 26. Get there before these mysterious creatures of the night vanish until next year! Learn more about the haunt on their website, or get your tickets now from Big ticket.