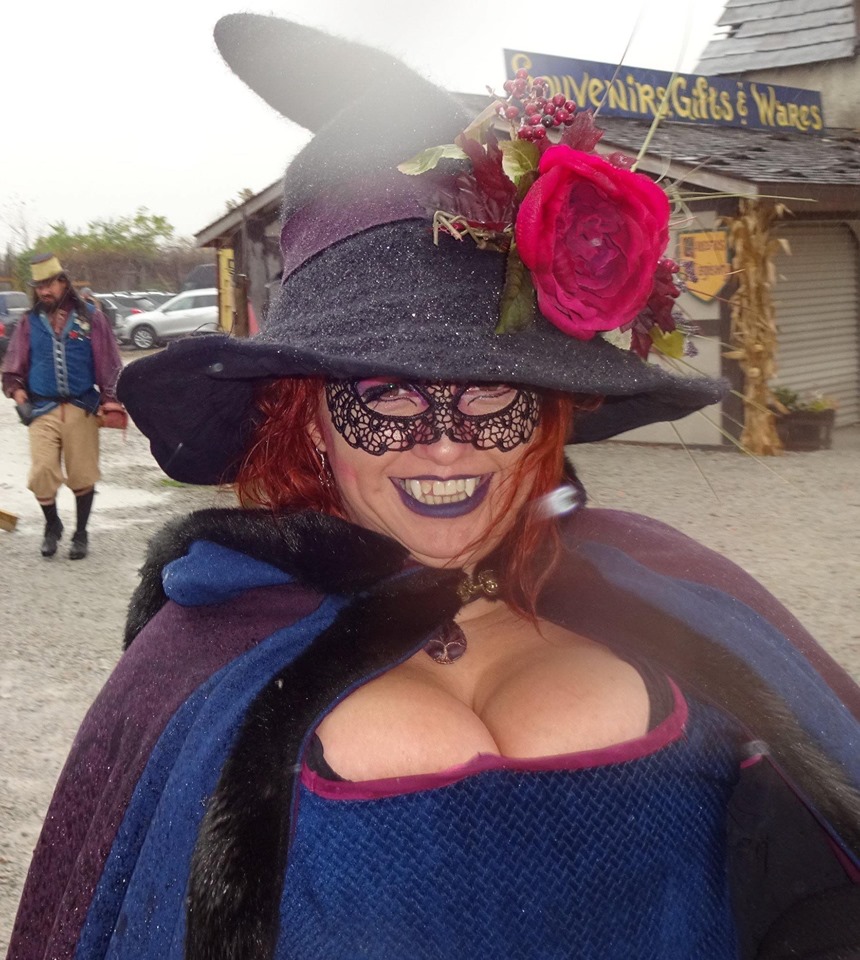 In his book “Guerrilla Theater For Faires and Festival,” J. Paul Moore refers to the improvisational performance required of the cast members for many ren faires as a “nebulous energy which is transmuted into an experience for the audience to view or more often than not, participate in for themselves.” The theater is communication. Communication which offers the opportunity for those involved to participate in a shared illusion. The dynamic required allows for a choice, a wardrobe if you will, that once opened can transport the guest into this same world that the cast members so readily inhabit. Many of ORF’s dedicated performers are people who decided to step inside the wardrobe and take part in the living theater of the faire.

The first year on cast is often the roughest, which is to be expected. They experience the faire from an entirely different perspective than they are used to and their expectations are changed over time. You see the newbies working to find out where they fit in the village. There is so much more to it than a name and occupation. There is a delight in watching the shy newbie blossom at their first opening gate and really put forth that excellence that was developed over months of rehearsal. Even then, you may – and should – see the character continue to transform over the two months of the run. Not just because the cast member has continued to workshop their development, but because they have spent more time in this village members shoes and have grown comfortable walking in them.

This is part of the reason that we see the same people in Willy-Nilly year after year. The actor has come to be known for that role and may have found that they don’t want to let go of it. This is a good thing. I see guests come in every season who want to know if the ‘Lord Mayor’ that was there last season is still on because they got such a big laugh out of him. Children come through the gates wanting to know if the same fairies they played with will remember them (which they always do) because they’ve gotten older since then.

There is also a value in changing roles from time to time. Sometimes it’s that a performer feels they have mined this resource for all it’s worth and they are ready to move on to a new challenge. Sometimes the cast needs a refresher and branching out with a different role can help keep the excitement of being in faire from growing mundane. Other times the casting director has something you’d be just perfect for! Changing rolls over time is a part of how we breathe new life into the faire and experiment with our expectations of how we fit into this little village which has become so dear to us.

It should come as so surprise then that Kim Tomlinson, who has been involved directly with faire since 2003, has traveled through many different roles in Willy-Nilly. Currently cast as one of the three Whiskey Wenches, Kim is part of the Jameson’s Whiskey tasting that occurs every weekend during the ORF run. She has immersed herself in many roles, from village to court, imagined and historical and has brought each to life with a unique vigor and dedication. I asked her a little bit about what it’s been like to be involved in the cast and what it’s meant to her.

Kim: In 1995. I went with several high school friends and my then 3-year-old son, and we all went in various forms of absolutely NOT period garb, but we didn’t know that!

Kim: After that first visit I was hooked. We went as often as possible and always in garb. My friends and I had picnic lunches at the car just to be able to afford our ticket in each weekend. There was a kiosk inside the gate and every year I applied to work on cast but never got a call. One day at work a coworker and I were closing the store and he mopped as I swept. He began singing “Mingulay Boat Song” and I joined in. He paused and asked: “Where did you learn that song?” I replied: “At the Ohio Renaissance Festival!” He said: “I WORK at the renaissance festival!” And I said, “I WANT to work at the renaissance festival!” And long story short he introduced me to some of the other cast members including our now director Dave Smith who told me to come to auditions and that year I joined the performing cast.

What was your first year ‘working’ during the run? What did you do?

Kim: 2003 was my first year and I played Brigitte Violette DeLaCoeur, French cook to the Lord Mayor Sir Christopher Thomas Lyndon (who was played by my now husband).

What roles have you taken on in cast? Who were they and how did they fit in the village?

Kim: After GiGi (after whom we named our daughter. Our son Christopher is named for hubby Chuck’s mayoral character) I played Millicent Honeycutt, town gossip and beekeeper. In 2005 I joined Her Majesty’s court and portrayed historical character Lady Mary Dudley, wife of Sir Henry Sidney and mother to Mary and Phillip Sidney who became famous poets. Following Christopher’s birth, I took a few years off and returned to play Lady Anne, Countess of Warwick; my husband was sir Ambrose Dudley the Earl of Warwick at the time. Four years later our daughter was born and again I took a few years off to raise her to an age where we were comfortable enough to return again. Last year was my return and I played Allura Fiendish, one of the Whiskey Witches! She was so much fun to portray and I really enjoyed learning so much about whiskey. While Christopher was little I worked at booths for friends and did kid care for other renfolk too.

Which was your favorite?

Kim: I have to say GiGi and Allura have been my favorites. They really bring out my playful and flirty side.

What went into the creation of your characters?

Kim: With Brigitte, it was easy having taken four years of French in high school. It gave a solid foundation and I enjoyed the look on people’s faces when they tried to speak French to me to “test” my character’s authenticity. I also live to cook and am now a personal chef. Allura took a lot of research in Jameson whiskey and the company’s history. We witches attended whiskey tastings to compare brands and shows. I am a pagan and it was fun to play a fantasy witch for a change.

Who are the people in your faire squad?

Kim: My squad is pretty big after 16 years, comprised of fellow first-years (people who joined cast the same year as me) like Tina Maruffi- Reid and Rhonda Payne, and others I’ve gathered each season like Erin Riddle, Wayland Reid, my husband Chuck, and most recently Courtney Beekman. I’ve been “faire mom” to so many of our cast members over the years as well, and they all hold a special place in my heart but Laura Ward was my first Fairechild. I’ve been in 8 Hands Round dance troupe, done stage combat in chess match, and am Lost Viking #175. This season I will be joining the IWG!

We wouldn’t have faires, not in their best incarnation, without the continued participation of dedicated veterans and experienced participants. So my final question is always “Why do you keep coming back year after year? What is it about the festival that pull you in?” Each answer is unique, but with the same connection to the spirit of the ren faire. Kim had this to offer:

The love, the magic. It sounds cheesy but there is love to be found in all its forms. All of my closest friendships were formed there, I found my husband and Ladylove there, and made friends who became heart-sisters to this only child. I learned to be myself and found acceptance at ORF. My life wouldn’t have been the same without it.”