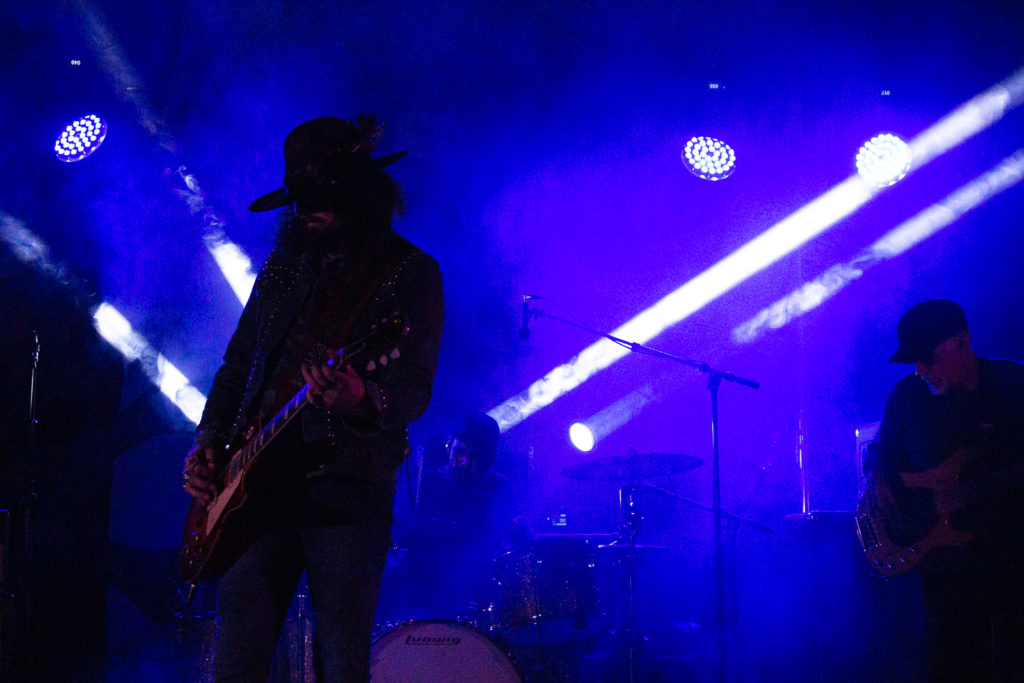 They sure are finding ways to keep us busy at the ORF grounds this season! From concerts to bbq, special events, and community gatherings there’s something to do every weekend even without the larger faire being operational.

We spent last Saturday evening at the 1572 Presents for a concert with Scotty Bratcher as he took to the stage. It was a chilly night, but worth braving the cold for a chance to see this accomplished musician in action. He has worked with several famous acts including Ted Nugent, Blue Oyster Cult, and Peter Frampton giving him the opportunity to master many different styles of music.

I defiantly got into his styling as we listened to the guitar riffs wail out over the crowd through the crisp night air. I always think it’s a good sign when I start looking for them on Spotify and just blasting the soundtracks on the drive home. I’ve really gotten into songs like Whipping Post. And there were moments on stage when it felt like the music just flowed organically, which really struck hard and got me into the vibe of the performance.

Renaissance Park even provided some fires around the outskirts of the stage for people who wanted a chance to warm up. I think we all underestimated just how chilly it was going to get! But on the plus side, wearing a masks helps keep your face from getting too cold! There are talks that next weekend will bring out hot ciders and queen’s tea, so keep your eyes open at the next Magical Days, Madrigal Knights event!

The next (and last concert) features Southern Accents on October 3rd!

Outside the officially sponsored festivities on the grounds are little opportunities for you to find your community! We’ve talked before about the International Wenches Guild Local:73 and their involvement with ORF and the larger community. Well that involvement doesn’t stop on the off-season. With spooky season just around the corner, the Local 73 decided to have a little get together up at Sun Henge for a witchin’ good time!

The Hexenbrut, also known as the Witch Dance, started in the modern popular consciousness as a celebration of Walpurgis (April 30th) in Germany. While the day is dedicated to Saint Walpurgis, it also holds significance through history as a festival of fertility. Walpurgisnacht, however, is notorious as a day when witches ride and all sorts of bedevilment happens. The dance became viral in 2016 when the German club song, Schüttel deinen Speck by Peter Fox was used by the women of the Wolfshäger Hexenbrut group to celebrate the occasion. Since then it has taken hold across the world, with many women gathering together for parades and neighborhood Halloween celebrations to do their own versions and revel in the fun.

The IWG local 73 has done this many times before, but since this year has put a lot of distance between its members, there was no better occasion to recall the troops and bring them together for this special dance. We even got lucky and had a special appearance from the fiendish sister themselves, the Whiskey Witches of Willy Nilly! We will release the video of the dance on October 1st as a special thank you to the Wenches & Witches who participated on the official Ohio Renaissance Festival Facebook page so keep your eyes peeled!

Speaking of spooky season, the opening of Brimstone Haunt is right around the corner! The ticket office opens at 7 pm on Friday September 25th, but we strongly advise getting them online. Everyone is hungry for haunt season so I have no doubt it’s going to be a screaming good time! You can visit the website for more information about prices, attraction intensity, and especially their COVID-19 policy. The scare actors have gone through weeks of rehearsals ensuring they can still give you a terrifyingly good time without putting your health at risk. It’s only right to return the favor so they can keep scaring you for weeks to come.

We will be out at Brimstone for the opening night, talking to guests as the evening progresses. So put on your scream face, grab a mask, and come talk to us!

You asked for it! ORF has decided to include one more Magical Days, Madrigal Knights day to the roster! Tickets are already on sale for October 17th 2pm – 10 pm so you can come out and enjoy the spectacle in perfect faire weather. It’s only $10 a person! Feast tickets have already sold out, but you can still enjoy some of your festival favorites like bourbon chicken and cream cheese filled pretzels. Remember to bring an extra cloak so you can enjoy the stage acts well past sundown.